Ex-president Tony Tan honoured for role in setting up SMU

Ex-president Tony Tan honoured for role in setting up SMU 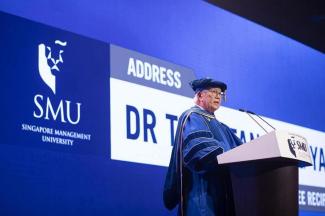 Former President Tony Tan Keng Yam started drawing up plans in 1997 to set up SMU when he was Deputy Prime Minister and overseeing higher education. When formulating the blueprint for the country's third university, he took the opportunity to give differentiation, variety and new directions to Singapore's higher education sector. On Tuesday (July 26), Dr Tan was lauded for this and many other contributions with an honorary Doctor of Laws from SMU. Businessman Ho Kwon Ping, who helms leisure group Banyan Tree and is Chairman of the SMU board of trustees, was brought in to head the new institution. Mr Ho delivered Dr Tan’s citation – 25 years after his first meeting with Dr Tan to set up SMU. Mr Ho also said he will turn 70 next month and will be stepping down as SMU chairman after more than 20 years. SMU said it will announce a successor at a later date.