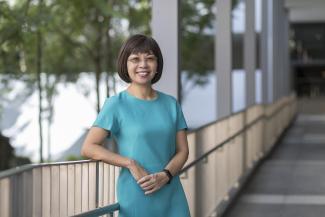 Singapore, 24 May 2022 (Tuesday) – The Singapore Management University (SMU) announced today that it has appointed Professor Lee Pey Woan ( 李佩婉 ) as the new Dean of the SMU Yong Pung How School of Law (YPHSL), following an extensive and rigorous global search that started in August 2021.

Professor Lee, who is currently SMU’s Vice Provost (Faculty Matters), will succeed Professor Goh Yihan, S.C. as the University’s Law Dean from 1 July 2022 for a five-year term. Professor Goh, who has been appointed as a Judicial Commissioner of the Supreme Court of Singapore for a term of two years with effect from 1 July 2022, will be on leave of absence from the University to fulfill his new role.

SMU Provost Professor Timothy Clark, who led the international search for the new Law Dean, said, “Professor Lee Pey Woan’s appointment is strongly supported by SMU Board of Trustees, SMU President, our law faculty and other key stakeholders. Pey Woan has been a dedicated member of SMU since its establishment and has served in various management roles. She is highly respected by her colleagues for being a dedicated educator, inspiring leader and able administrator. Pey Woan brings to the deanery a deep understanding and knowledge of the University and of Singapore’s legal landscape, as well as strong ties with the legal community. The YPHSL, which is celebrating its 15 years of establishment this year, is at a pivotal point of its development. I am confident that Pey Woan will build upon the strong foundation laid by her predecessors and take the law school to even greater heights in its next phase of growth.”

“On behalf of the SMU Community, I would like to thank Professor Goh Yihan for his visionary leadership and tremendous contributions to SMU and YPHSL during his term as Dean. Since he took office in 2017, Yihan has displayed a high degree of energy and enterprise, and is instrumental in rebranding the law school’s curriculum and programmes at both the undergraduate and postgraduate levels, and in raising its reputation and presence. The School also sharpened its research focus on law and technology, transnational commercial law in Asia, and dispute resolution. We wish him every success in his new role as Judicial Commissioner of the Supreme Court of Singapore,” Professor Clark added.

On the appointment, Dean-designate of SMU YPHSL, Professor Lee, said, “I am excited to be given this opportunity to lead YPHSL and it is an immense privilege to chart the next phase of this exciting journey with all our colleagues.  Our vision for YPHSL has always been that law must be studied in context, and that continues to be distinctive of our curricula. We have established strong ties with all key stakeholders including government agencies, courts, the legal profession and select businesses, having earned their trust as a credible partner in advancing the interests of the legal profession and the community as a whole. Together, we can build on this firm foundation to realise our educational and scholarly ambitions to become Asia’s leading law school.”

Professor Lee graduated with a Bachelor of Laws (First Class Honours) from King’s College, University of London and subsequently obtained the Bachelor of Civil Law from Oxford University. She is an Advocate and Solicitor of the Supreme Court of Singapore and was also called to the external Bar in England and Wales (Middle Temple). Prior to joining SMU in 2000, she was the Legal Manager of Keppel Corporation Limited.

Professor Lee began her academic career as a pioneering faculty member of the-then Law Department within SMU’s business school. After SMU’s law school was established in 2007, Professor Lee was appointed as Associate Professor of Law in 2008. She has since served in various management roles at the YPHSL – she was Associate Dean, Teaching and Curriculum Matters from 2010 to 2013 and 2017 to 2020; Academic Director for Faculty Matters from 2017 to 2020; and has been involved in faculty governance in various capacities since 2008.

In 2020, she was appointed as the University’s Vice-Provost (Faculty Matters), a role which she holds to date. In this capacity, she assists the Provost in the planning and development of faculty, and advises on faculty personnel policies.

Professor Lee is an accomplished scholar whose research interests are in company, private and commercial law. She has published widely in local as well as leading international journals, including the Modern Law Review, Oxford Journal of Legal Studies, Law Quarterly Review, Lloyd’s Maritime and Commercial Law Quarterly. She has also co-authored textbooks on Contract Law, Tort Law and Company Law. Her works have been cited by the Singapore Court of Appeal, the Singapore High Court and the Canadian Supreme Court.

Apart from academic activities, Professor Lee is also active in the Singapore legal profession. She speaks regularly at legal conferences, and serves the legal profession as a member of the Corporate Law Advisory Panel for Accounting and Corporate Regulatory Authority. She has also been appointed amicus curiae before the Singapore Court of Appeal.

She is a recipient of several national, university and school level awards. In 2010 and 2021, she was awarded the National Day Award – Commendation Medal and Silver Medal respectively. In 2018, she was awarded the Lee Kong Chian Fellowship for Research Excellence. Prior to that in 2009, she also received the SMU School of Law Research Excellence Award.