S'pore unis urged to link up with the world, community and industry

S'pore unis urged to link up with the world, community and industry 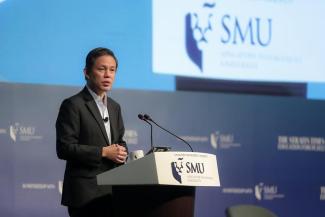 Universities here must work harder to connect with the world, and Singapore's communities and industries, as well as one another, said Education Minister Chan Chun Sing. Singapore's educational institutions should not just transmit knowledge, but also become connectors for collaboration in response to an increasingly fragmented world, he added. He was speaking at The Straits Times Education Forum 2022 on the "The evolving role of universities", held in partnership with SMU on Thursday (Feb 10). He also said that SMU should aim to "inspire and lead" the transformation of the city centre. SMU President Professor Lily Kong, who spoke in the panel discussion following Mr Chan's address, responded to his point, saying SMU's place in the heart of the city has spurred it to actively cultivate a sense of citizenry among its students.