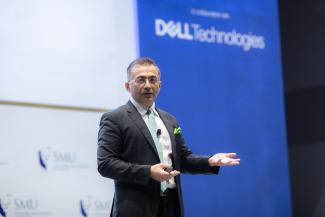 SMU President Professor Lily Kong hosted the hybrid event which was attended by close to 350 SMU students, staff and faculty, polytechnic and junior college students, and teachers, as well as government, media and industry representatives.

Mr Midha began his speech by positing that the context of digital cities is the context of change. Change is a constant that affects economies, companies and societies at varying speed. Looking at how the global economic powers have fared over the millennia, he said that whichever country that is able to manage change better than the others, have been able to increase their share of the global GDP significantly. At the company level, technology evolution has played a key role in reshaping the corporate landscape over the last century; it has also created new jobs as economies evolved. “Leadership is about first, accepting the change; second, understanding the change; and [third] harnessing the change to create exponential benefits,” he said.

Mr Midha went on to say that cities are the platform for managing change, creating new opportunities, and solving existential challenges, thereby enabling their citizens to be prosperous and the cities relevant. He cited NEOM of Saudi Arabia, Toyota Woven City, New York and Dubai as examples of cities pursuing transformative visions for their future. For Singapore, the city-state plans to add 100 hectares of green spaces by 2035, green 80% of its buildings by 2030, and increase sustainable local food sourcing by 2030. Mr Midha added that cities have been critical to human development for millennia as the centres of commerce, technology and innovation, constantly transforming to remain competitive and grow. In this process, the cities have developed seven distinct drivers of success over the years such as industry clustering, talent feeders, ecosystems, specialisation and transportation networks & connectivity. The key question then would be to identify the competitive advantages that would be critical for the next generation of city transformation.

Mr Midha shared that the cities of the future would need to address several challenges, including intensifying urbanisation and disruptive technology paradigms. These cities would also need to take into account the “Next Normal”which has further accelerated these paradigm shifts - “work from anywhere”, “everything from home”, “need for resilience” and “need to drive economic recovery and growth”. Given the above, he defined ‘Digital City’ as ‘A city that thrives in the 4th industrial revolution by embracing the disruptive possibilities of the data era of the future’. He said, “The key thesis is what can cities use to become more successful, thriving and relevant. Just like steam engines drove the success of certain countries in the past, similarly, technology is going to create success for certain cities and countries. That’s the core idea behind a Digital City.”

Mr Midha opined that in addition to the seven drivers of success for cities and countries, Technology & Digital Transformation is the eighth enabler for success which is playing an increasingly critical role. The convergence of key emerging technologies like 5G, Edge, Artificial Intelligence and Machine Learning is enabling new city capabilities, which are in turn driving some exceptional outcomes across city domains such as Public Safety, Urban Mobility, Energy & Sustainability, Citizen Health and e-Governance. He put forth a framework with three key building blocks that addresses these transformation imperatives and citizen outcomes: Leadership & policies, Operating Model & processes, Community & Ecosystem.

In order to achieve this vision, Mr Midha contended that a digital city cannot be built in siloes. Given the complex, interconnected and dynamic nature of the urban ecosystem, he said the true value of this transformation is achieved only when the cities grow as intelligent ‘System of Systems’ that maximizes the value of the data, which forms the core fabric of these cities of the future.

Offering a roadmap towards the future development of cities, Mr Midha said that an iterative transformation framework across People, Process & Technology would be required:

Mr Midha emphasised the importance of having a continuous learning mindset in order to build and adapt to the skills of the future. With value shifting from the manager/operator role to that of the dreamer/builder, students and curriculum designers would have to take this into account when identifying the skillsets to develop. He added that domain expertise remains crucial with technology serving as an enabler to achieve disruptive outcomes. He ended his speech by saying that the best way to predict the future is to invent it, this is where leadership and vision are important. 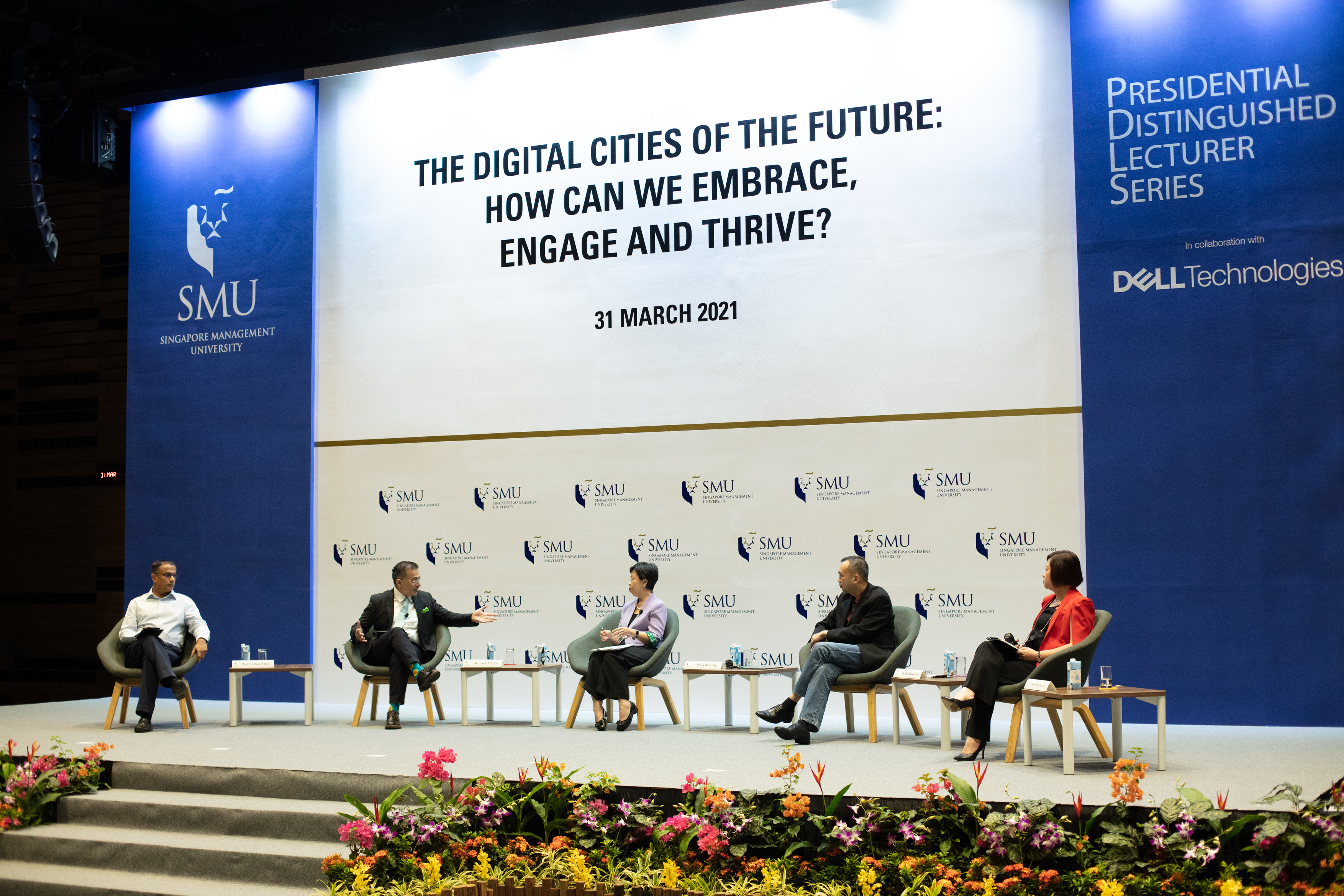 Asked to define a smart city, Mr Tan said that such a city would, first, be responsive and adaptable to change; and second, optimise and synergise across its different subsystems to deliver the best outcomes in quality of life, sustainability and city service delivery. It was possible to be smart without being obviously digital: for example, growing mangrove swamps to achieve both coastal protection and nature conservation is pretty smart. But the digital overlay does allow us to use data and computational techniques to better sense and respond to situations, and to discover complex dependencies across systems.

Ms Loh said that as a technology company in the payments industry, Mastercard views technology as an enabler to solve problems a smart city faces. She used the example of Mastercard working with the Land Transport Authority and TransitLink to utilise Mastercard’s point-of-sale technology to move people through the turnstiles. As of 2019, a quarter of a million trips were made each day using this technology. She surmised that a digital city is therefore one which uses technology to advance sustainable urban development.

Prof Misra opined that a digital city is one that uses info-comm technologies to serve three stakeholders: governments, businesses and individuals. In his view, the development of smart cities  can be characterized by multiple phases, from an initial focus on enabling citizens to perform municipal transactions online, to the next phase of using offline big data analytics to improve governmental decision making, to an ongoing phase of optimizing real-time operations (such as adjusting traffic lights automatically in response to changing vehicular flows). Prof Misra stated that, in the coming years, the focus of a digital city would shift towards using technologies to promote sustainability.

The panel also fielded questions including the roles of the government, the private sector and the individuals in the making of a digital city; the impact of technology on different segments of society; and how to retain the human connectedness in the face of pervasive use of technology.

If you wish to catch the event again or might have missed attending it, you can view a recording of the event here.