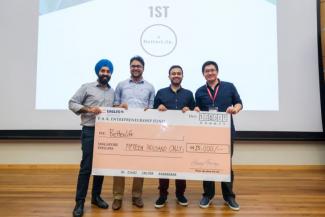 The finals of the 4th P.A.K. Challenge came to a successful conclusion on 12 May 2019 with five teams walking away with a total of $40,000 to further develop their business ideas.

Organised by Eagles Inc, a student club under the SMU Institute of Innovation and Entrepreneurship, the competition seeks to enable aspiring entrepreneurs turn their start-up dreams into reality.

The finals was graced by Eagles Inc’s academic advisor Assistant Professor Terence Fan from Lee Kong Chian School of Business (LKCSB), as well as representatives from six partners and sponsors, which included IBM and Soi 55.

The establishment of the Eagles Inc and the P.A.K. Challenge were made possible by LKCSB alumni Jeff Tung and Benjamin Twoon who had donated $1 million to set up the P.A.K. Entrepreneurship Fund in October 2015. The Fund aims to ignite the entrepreneurial spirit amongst SMU students and to support the growth of the entrepreneurial ecosystem in SMU.

This year’s competition drew a total of 44 teams comprising 140 participants from nine universities and polytechnics in Singapore. A boot camp was organised in February for the participants to learn from industry experts and build valuable connections. 14 teams entered the semi-finals which were held in March, and five teams were eventually selected for the finals.

The results are as follows:

Haridesh Kumar Sharma, a masters student from NTU’s Team BetterLife said, “This competition has given us a good opportunity to showcase our ideas, which we think will benefit the diabetic patients in the future. We intend to use the prize money to expand our team so as to provide a better solution to these patients.” Team KpopKart from SMU took the second spot and $10,000 for their idea of providing an online marketplace for Korean Pop fans to shop for exclusive merchandise. Team Beepi from SMU came in third and took home $5,000 for creating an affordable device to help monitor dementia patients. Additionally, the team, seen here with Mr Benjamin Twoon (right), COO of Fundnel, won $1,000 for the most creative pitch among the finalists.