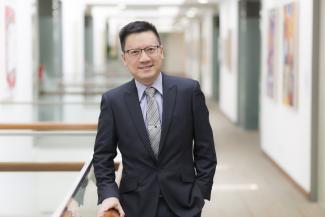 Singapore, 3 January 2022 (Monday) – The Society for Industrial and Organizational Psychology (SIOP) has conferred the prestigious Raymond Katzell Award to Professor David Chan (陈振中教授), Director of the Behavioural Sciences Initiative (行为科学研究院长) and Professor of Psychology of the Singapore Management University (SMU) (新加坡管理大学) for his outstanding contributions in using scientific research to address social issues and make a difference to people and society. Professor Chan, who makes history for being both the first Singaporean and the first Asian to receive this top award, will receive the award and deliver his keynote address at the Annual SIOP conference to be held this April in the United States.

The SIOP, which has more than 10,000 members, is the largest organisation of industrial and organisational psychologists worldwide. It is devoted to the scientific study of working and the application of that science to workplace issues facing individuals, teams, and organisations.

The Raymond Katzell Award is a top honour bestowed on an individual “who, in a major way, has shown to the general public the importance of work done by industrial and organisational psychology for addressing social issues.” As stated by the SIOP, the prestigious award is designed to recognise “research that makes a difference for people.” Past recipients of this award include world-renowned business professor Edward E. Lawler III from University of Southern California and psychology professor Alice H. Eagly from Northwestern University.

In addition to recognising the wide-ranging impact of Professor Chan’s lifetime scientific and practical contributions, the awards committee highlighted his societal contributions on managing the COVID-19 pandemic in various ways and in particular his bestseller book, Combating a crisis, which explains the psychology of Singapore’s response to COVID-19. The book, published by World Scientific in 2020, is a clear example of using science to address social issues and solve practical problems for policymakers, organisations, and the general public.

“I’m humbled and honoured to be the first Singaporean and first Asian to receive this award. Together with the accomplishments of fellow Singaporeans in other fields, I hope it reinforces our confidence and hope that we can make meaningful impact in various ways. It is also a good time to remind ourselves that many Singaporeans, whether they are formally recognised or not, are making a positive and practical difference to people’s lives, locally or globally”, said Professor Chan.

Professor Chan is internationally known for his scientific and practice contributions in research methods, personnel selection, individual adaptability and well-being, as well as in many fields beyond industrial and organisational psychology, including personality and social psychology, particularly in his research on individual differences and social attitudes and how individuals make judgments and adapt to various changes across diverse situations.

In addition to this latest prestigious award, Professor Chan has previously received numerous prestigious international scholarly awards from various scientific organisations. In April 2011, he became the first Asian to be appointed Elected Fellow of the SIOP. In the same year, he was named Elected Fellow of both the Association for Psychological Science (APS) and the American Psychological Association (APA), and a year earlier in 2010 he was presented the award of Elected Fellow of the International Association of Applied Psychology (IAAP). In 2017, both the Society for Personality and Social Psychology (SPSP) and the American Psychological Association Division of Personality and Social Psychology (APA Division 8) conferred Professor Chan the Elected Fellow award, making him the first scientist in the world to receive Elected Fellow status from all the six major international organisations for psychologists (i.e., SPSP, APA Division 8, IAAP, SIOP, APS, APA). In 2019 at Washington, DC, United States, he was conferred the inaugural prestigious award of Scientist-Practitioner Presidential Recognition for his outstanding contributions in the combined science and practice in the field of industrial and organisational psychology.

This is not the first time that Professor Chan made history in his field and for Singapore in the world stage. In 2003, he became the first non-American to receive the prestigious Distinguished Early Career Contributions Award presented by SIOP, and in 1999 he was the first non-American to receive the William Owens Scholarly Achievement Award. In 2000, he was ranked 9th worldwide in the list of Top 100 most published researchers of the 1990s in the top journals of Industrial and Organisational Psychology. In 2020, a global study by Stanford University on researcher impact named him in the top one percent of scientists across all disciplines.

Professor Chan, whose works have been cited over 13,000 times in various scientific disciplines, has served on an international committee with Nobel Laureate in Economics Professor Daniel Kahneman and four other psychologists from different countries that submitted to the United Nations a report on measures of national well-being across countries, which was subsequently incorporated in a report published by the United Nations.

Professor Chan serves on various scientific advisory panels, national councils and boards in the public and people sectors. He is also a regular contributor to various media outlets in Singapore, including being an invited columnist writing commentaries for The Straits Times and an invited consultant to the Channel NewsAsia’s “Social Experiments”, which is a popular five-part programme series that examined human behaviours and social phenomena using scientific experiments and the award-winning five-part documentary series “Days of Disaster”, which examined the lessons learned from previous disasters in Singapore.

Read more in The Straits Times and Lianhe Zaobao. Listen to Prof Chan's acceptance speech at the SIOP 2022 here.