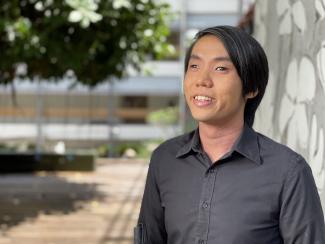 Receiving the award from Emeritus Senior Minister Goh Chok Tong at the Goh Chok Tong (GCT) Enable Awards Ceremony held at the Istana on Thursday, 3 December 2020, Joshua Tseng is one of sixteen individuals who were honoured at the event.

Launched on 15 January 2019, the GCT Enable Awards is an initiative by Mediacorp Enable Fund (MEF). The founding of the Awards was inspired by Emeritus Senior Minister Goh Chok Tong, who is the Patron of MEF, to bring about a “kinder and gentler Singapore.” The awards aim to recognise the achievements of persons with disabilities, and to motivate those with promise and potential to go the distance with their endeavours.

The Awards hold the two categories of “UBS Achievement” and “UBS Promise”. “UBS Promise” aims to encourage persons with disabilities who have shown exceptional promise to pursue greater heights in their areas of talent and willingness to serve the community.

Currently a Year 3 student at SMU School of Information Systems (SIS), Joshua is visually impaired. Through various programmes and activities on campus, SMU’s Diversity, Inclusion & Integration (DII) unit engages Joshua and fellow students with disabilities and special needs, to provide support and to promote a spirit of inclusion and integration.

When asked about his SMU experience, Joshua said, “Making the jump from my studies for a Diploma in Marketing at Temasek Polytechnic to a Bachelor’s in Information Systems at SMU was a big leap on its own, and studying an IT-related course for a person with a vision impairment further adds its own set of challenges. I’m thankful I’ve been able to make it this far both based on my own merit and with the support of family, friends, mentors, faculty, and other staff from SIS and DII – I wouldn’t be here without any of these people.”

Nominated by SMU, Temasek Polytechnic, and IC2 Prephouse, Joshua was conferred the award as recognition for his efforts in being a disability advocate, as well as for the many social projects he has been a part of. He has spoken frequently at events, imparting his experiences as a person with vision impairment and advocating for accessibility. As a public speaker at events organised by Microsoft, TEDxYouth, Temasek Polytechnic, National Council for Social Service, and more, Joshua has spoken to an audience of close to 1,000 over the past five years.

In 2017, he was part of the team at Etch Empathy to create Singapore’s first major cooking workshop for the blind, helping create curriculum, participate in the pilot test, and brainstorm ideas. Today, the project has expanded into a social enterprise run by Aaron Yeoh called Fortitude Culina, which conducts cooking classes for people with vision impairments.

Joshua also co-founded The Unusual School (TUS), a social enterprise that is dedicated to developing emotional intelligence by applying psychology, philosophy and culture to everyday life. Its trainers, deemed unusual, impart soft skills such as resilience and empathy built up over the course of their own experiences of hardships.

Joshua’s co-founders incude Aaron Yeoh, Director of Etch Empathy and Fortitude Culina and Ali Daud, a fellow person with vision impairment who is a professional counsellor. Elaborating on his motivations for setting up TUS, Joshua said: “We wanted to find a way to give people with disabilities and other people in marginalised groups an avenue to earn an income in a sustainable and meaningful way. TUS was a platform through which we hoped people from marginalised groups in Singapore would be able to use their personal obstacles and hardships to teach others soft skills like empathy, problem-solving, and resilience using structured workshops that take advantage of social-emotional learning (SEL).”

He added, “We envisioned the SEL-focused workshops would help Singaporeans take a small step towards building a kinder, more thoughtful, and more resilient society that would be prepared to tackle the challenges of the 21st century. Given the unique, impactful experiences people from marginalised groups have, we wanted TUS to be a structured, consistent platform through which these stories and messages can be communicated.”

Joshua had participated in the SMU Social Startup Challenge 2018 to try to win some additional funding via the prize pool. His team received honourable mentions for the idea of TUS, which was still in its infancy at the time. The social enterprise is presently on a pause. Joshua shared, “TUS is currently inactive, with no plans currently to continue due to a lack of funding and inconsistent turnout rates for the workshops conducted. However, it might be revived at a future point when ongoing and planned projects by Aaron and myself are more mature down the road.”

Armed with a vision of a Singaporean society that embraces people with disabilities, Joshua has been an active advocate for accessibility and inclusivity over the past five years. He commented, “I hope the upward trend we are seeing in inclusivity efforts continues, and I’m confident this will be the case. Schools, government institutions, employers, and many more individuals and groups have really been opening up to accepting people with disabilities over the past few years, and this is a positive trend I will be very glad to see continue.”

“I hope Singaporeans continue to innovate, using technology, social initiatives, and other methods to improve the lives of fellow Singaporeans. There are still many issues that need to be solved for people with disabilities in areas like transportation, access to care givers, education, and employment, so I hope many of the initiatives from both companies and public sector organisations like IMDA and SG Enable continue to make these issues a priority,” he added.

Joshua said, “I hope people with disabilities (PWD) and fellow Singaporeans, will learn to recognise that disabilities are not pitiable afflictions that make people helpless. Too often, we (even PWDs ourselves) think of our conditions as things that “need” to be cured, healed, or make us disadvantaged in all aspects of life because of the different circumstances we have to live with. The truth is that whether or not one has a disability, we are all just human, and should focus on what we have in common rather than what makes us different.”