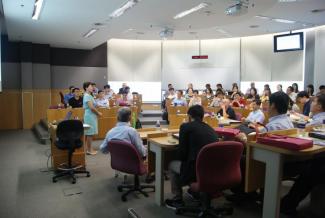 The School of Accountancy (SOA) held its fifth annual SMU-SOAR Accounting Symposium on 11 and 12 December 2014 at SMU. Since its inception in December 2010, the Symposium has become the flagship programme of SOA, bringing together the world’s top scholars and experts on accounting, governance, reporting and standard setting to discuss topics in these areas. The Symposium is funded by an endowed gift from Prima Limited since 2011.

The Symposium features keynote speeches by prominent scholars, as well as research paper presentations and discussions. Paper selections are highly competitive. Out of a total of the usual 50 to 60 papers submitted annually, only five to six papers are accepted and selected for presentation. As with the previous years, the Symposium in 2014 was limited to 50 participants to promote close interaction and registration was closed long before the registration deadline due to overwhelming response. The composition was diverse, with participants coming from Asia, Europe and North America.

The Symposium’s keynote speaker was Dr Shivaram Rajgopal, the Schaefer Chaired Professor in Accounting at the Goizueta Business School, Emory University. Professor Rajgopal’s research focuses on two areas: (i) investigation of the determinants and consequences of financial reporting strategies; and (ii) exploration of the relationships between executive compensation (stock options) and executive behaviour such as risk taking. His research work is widely published in accounting and finance journals, and he has served as editor as well as a member of editorial boards of several leading journals.

In his speech, Professor Rajgopal talked about his highly cited studies that involved surveys or interviews with top executives of U.S. firms on various corporate reporting issues, such as the importance of meeting earnings benchmarks or smoothing income, the actions taken to meet the earnings benchmarks or smooth income, voluntary disclosure of corporate performance, and indicators of high quality (sustainable) earnings. The findings of these studies reflected the practitioners’ views which were consistent with the foundations of many academic research studies. Professor Rajgopal also discussed his recent studies on the impacts of revolving doors on the enforcement efforts of the U.S. Securities and Exchange Commission (SEC) prosecutors and the SEC’s enforcement against auditors. His research showed that enforcement efforts were tougher among attorneys who subsequently join SEC specialist firms, which suggested that former SEC attorneys were hired by firms for their regulatory and technical expertise rather than for lobbying or networking ability. On the other hand, an auditor was named as a defendant in less than 20 per cent of the enforcement actions initiated by the SEC against companies, and individual audit partners were more likely than audit firms to be named in the SEC’s enforcement actions. Conditional on being charged by the SEC, a Big-4 auditor would less likely be named in SEC enforcement actions than a non-Big-4 auditor.

The Symposium went through an insightful Q&A session in which both the presenters and audience benefitted from a lively exchange of opinions via a constructive critique by discussants and the addressing of challenging questions from the floor.

“The conference was a great learning experience. Excellent papers and even better discussants,” said a participant, Professor Gerald Lobo from the University of Houston. Another participant, Professor Choong-Yuel Yoo from the Korea Advanced Institute of Science and Technology, added, “I very much enjoyed all of the paper sessions. SMU School of Accountancy certainly is serious about research and international cooperation!”