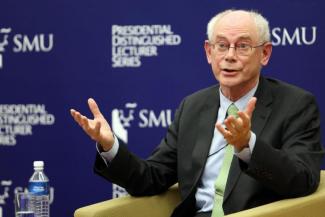 “We took, I think for the first time in a couple of years, concrete decisions which focused on growth and jobs, as well as investments, including infrastructure investment and private investment. This global investment initiative, and the creation of a hub where policies for the coming years are coordinated, were the concrete outcomes of the meeting,” said H.E. Herman Van Rompuy, the 17th speaker of the Presidential Distinguished Lecturer Series (PDLS).

He was addressing a question about his takeaways from the recently-concluded G20 meeting which he attended in Brisbane, Australia, during the dialogue session on ‘The Future of the European Economy’.

“The G20 meeting is important because of the many bilateral meetings where leaders can meet. When you see the leaders, such as the President of USA, China, Russia, the Prime Minister of Japan, around the table discussing the economy and topics beyond the economy, this is reassuring, because it shows that they are on speaking terms. I think this is the first time in human history that, on a regular basis, leaders around the world meet with each other, discuss, and try to find common ground. This is hopeful for the world,” he added.

More than 350 participants, comprising business leaders, ambassadors and members of the diplomatic community, representatives from the European Union Delegation to Singapore, Asia-Europe Foundation, members of various Chambers of Commerce and Business Groups in Singapore, and SMU Community attended the dialogue at the Mochtar Riady Auditorium on 17 November 2014. SMU President Professor Arnoud De Meyer moderated the discussion.

Mr Van Rompuy was elected as the first full-time President of the European Council in November 2009. In 2012, he was re-elected for a second term. At the time of his first election, Mr Van Rompuy was Prime Minister of Belgium. Prior to that, he had served in Belgium as Speaker of the House of Representatives (2007-2008) and in several government positions, including as Deputy Prime Minister and Minister of Budget (1993-1999), Minister of State (2004) and Secretary of State for Finance and Small Businesses (1988).

An author of several books, Mr Van Rompuy has received numerous awards and distinctions in his career, including the ESMT Responsible Leadership Award by the European School of Management and Technology in July 2014, the International Charlemagne Prize in May 2014, and the Harvard Club of Belgium Leadership Prize in 2010.

[Photo: H.E. Van Rompuy spoke to a packed auditorium on the economic challenges and prospects of Europe.]

On global economic prospects, Mr Van Rompuy said that China continues to grow at 7 percent, which is probably more sustainable than at 10 percent. Growth in the US is surprisingly high, partially the result of past policies when they quickly put their financial house in order after the financial crisis, as well as the shale gas revolution, which is a major game-changer. Its growth of 3 percent is quite high, given that it is a mature economy. However, Russia is in recession, while Brazil is almost in recession. In the Eurozone, economic growth is low. “But if you take a longer term perspective, I am not so pessimistic. Major efforts are being made to re-orientate the economies. This is the case in China and India. The Eurozone is embarking on major structural reforms, some of our governments are taking courageous decisions to confront parts of public opinion and sections of the electorate. People understand that reforms are inevitable. I see that leaders are aware of their responsibilities, and that’s quite encouraging.”

With regards to economic reforms in the EU, Mr Van Rompuy said that a lot has been done by some European Union member countries at the national level, but more can be done. Reforms of the labour market and pension systems are of key importance. Labour market reforms involve reforming taxation on labour to increase flexibility and speed of response to changes in economic activities, as well as to reduce discrimination in the labour market. On the reform of pension systems, Mr Van Rompuy felt that the retirement age will have to be increased, given that average life expectancy in EU is above 80 years old.

“Europe has the largest single market in the world with 500 million people of very high purchasing power. There is a need to deepen the single market, not only in the free circulation of goods and services, but also in industry. We need an energy union and a single digital market. If we can join forces, I see huge potential for growth in the European Union,” he added.

On the defining moments of his five-year Presidency of the European Council, Mr Van Rompuy said that he had one issue to deal with when he took over, that of the survival of the Eurozone. “We were quite convinced that if the Eurozone had collapsed, the Union itself would be in danger.” Despite doubts from the rest of the world about the continued viability of the Eurozone, European leaders showed strong political will to ensure the survival of this political project. “This was the main challenge of my Presidency, and we are very happy that we succeeded.”

In a lively Question & Answer session, Mr Van Rompuy fielded numerous questions from an enthusiastic audience, including the roles and responsibilities of various European institutions, Franco-German relationship, immigration and the growing strength of Eurosceptics.

The Presidential Distinguished Lecturer Series was launched in 2005 with the aim of stimulating discussions among faculty, staff and students as well as the larger external audience on issues of contemporary interest and significance. Recent guests who have graced this Lecturer Series and shared their wisdom with the SMU community included renowned political thinker and writer Dr Francis Fukuyama, former President of the World Bank Mr Robert Zoellick, and Professor Rosabeth Moss Kanter of Harvard Business School.

Brand Value – What does it all mean?