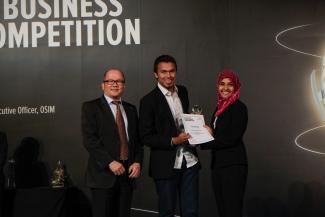 The tension in the air was palpable as the six teams of finalists from Bangladesh, Canada, China (Hong Kong), Indonesia and Singapore (represented by SMU) waited with bated breath for the winners of this year’s Lee Kuan Yew Global Business Plan Competition to be announced at the Awards Presentation Ceremony held at St. Regis Hotel on 23 August.

Tension eventually gave way to squeals of delight, applause, high-fives and hugs when Team HealthyCaps from Bangladesh’s University of Dhaka emerged as winners and took home US$36,000 after beating five other finalists to the top prize.

Named after Singapore’s first Prime Minister, Mr Lee Kuan Yew, who is widely recognised as a strategic thinker and a global visionary, this biennial marquee competition is organised by SMU’s Institute of Innovation and Entrepreneurship (IIE). It aims to encourage youth excellence in enterprise and is open to all undergraduates, college and polytechnic students around the world. This year’s competition is specially dedicated to honour Mr Lee on his 90th birthday.

More than 336 tertiary students from 28 countries and regions submitted 121 business plans to the competition this year.

In his welcome address, SMU President Professor Arnoud De Meyer said, “Since the inaugural edition of the Lee Kuan Yew Global Business Plan Competition in 2001, we have continuously enhanced its format to make it more attractive to participating teams from overseas as well as from Singapore. These teams possess genuine intentions of establishing new companies using the business plans presented at this competition. We are very pleased to share that the winners of the fifth and sixth editions of this competition have indeed gone on to create companies.”

Guest-of-Honour Mr Ron Sim, Founder, Chairman and CEO of OSIM International Ltd shared the lessons he had picked up over his 35 years in business. He said, “To be successful, you have to be MAD – possess a positive Mindset, a winning Attitude, and Drive.” He added that to be a successful leader, one has to have the additional qualities of a MAD COW – Courage (to take a stand, face the consequences), Openness (to absorb, analyse, adapt and apply) and Willingness (to face new challenges). He urged the student entrepreneurs not to fear failure, and to view setbacks as opportunities to scale new heights.

Dr Ting Choon Meng, Executive Chairman and CEO of HealthSTATS International Pte Ltd and chief judge of the 7th Lee Kuan Yew Global Business Plan Competition judging panel, said that when deciding the winner, the judges looked for the viability of the business plan and whether it was well executed. Alluding to the high quality of the plans submitted in this year’s competition, he said that the six teams of finalists are winners in the eyes of the judges. He encouraged the teams to see beyond profits and to possess a strong desire to make a positive impact on the lives of others.

Team HealthyCaps had impressed the judges with their business idea of extracting gelatin from fish fins and scales to produce capsule shells of superior bloom strength and oxygen permeability, compared to those made from gelatin extracted from traditional raw materials of pig skin and bovine hides. Additionally, the product would also not conflict with any religious belief, and could be accepted by a larger pool of consumers.

Team Planboard from Canada’s University of Waterloo and Team Elephant Casava from Indonesia’s Gadjah Mada University claimed the first (cash prize of US$12,000) and second runner-up (cash prize of US$3,000) positions respectively. The other finalists - Team Gazaab Social Ventures from SMU, Team Greenlock from the University of Dhaka of Bangladesh, and Team Inno-Chemos from City University of Hong Kong, China, were awarded consolation prizes of US$500 each.

One highlight of the competition was the four-day Entrepreneurship Study Mission which allowed the finalists to gain a better understanding of the innovation and entrepreneurship ecosystem, as well as initiatives in Singapore. They visited incubators and networked with early-stage venture capital firms and Technology Incubation Managers.

Another highlight of the competition was the presentation of the Most Promising Young Entrepreneur Award which recognises outstanding entrepreneurial potential among the six finalists. Mr Jamon Mok Zixuan, a member of Team Gazaab Social Ventures and a fourth-year student from SMU’s Lee Kong Chian School of Business, won the Award and a cash prize of S$5,000. Said Mr Mok, “I truly believe in the powers of entrepreneurship and to be recognised as promising in this field is definitely delightful. It's also heartening to know that my experience as an entrepreneur is valued and of consequence.”

As the best placed local team, SMU’s Team Gazaab Social Ventures also won a funding of S$100,000 from HSBC which they intend to use to explore possibilities of adding value to entrepreneurs they invest in through conducting field research and experimenting with technology applications.

In addition, the top three winners of the inaugural Youth Innovation Challenge, namely the Anglo-Chinese Junior College, Nanyang Junior College and Millenia Institute, were recognised at the Awards Presentation Ceremony.

The Ceremony also saw the launch of i-Club, or Innovation Club, by SMU to deepen its education, outreach and research leadership in the area of Innovation. The Club consists of the Chief Innovation Officer or the equivalent from global companies which demonstrate a deep interest in the study and practice of innovation for organisational growth and market leadership.