Tracking the Transfer of Ideas

Tracking the Transfer of Ideas 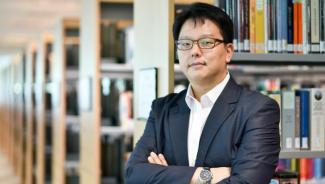 Assistant Professor Yooil Bae at the SMU School of Social Sciences studies what makes one model of growth successful in one country and a failure in another.

SMU Office of Research – Developing countries are host to more than 80 percent of the world’s population. From Vietnam to Venezuela, Kenya to Kazakhstan, one common trait is their dependency on borrowed knowledge. Where developed countries like the United States (US) and United Kingdom (UK) have run the course of industrial revolutions and technological advancements, many emerging economies depend on the economic models of developed nations for their growth.

This diffusion of ideas across countries – and the differing outcomes in each recipient country – fascinates Assistant Professor Yooil Bae from the Singapore Management University (SMU) School of Social Sciences. Past research has traditionally studied the top-down approach, for example looking at how the US has transferred its ideas to developing countries. However, less is known about the success of recipient countries in implementing these ideas.

Professor Bae’s main research agenda is how and why recipient countries react differently to borrowed ideas. “I look at the bottom-up process. How have countries developed in their own way to achieve their own policy goals? Why are only a handful of countries successful in their modernisation?” he asks.

The popularity of decentralisation

Professor Bae’s current research examines why many countries – regardless of pre-existing conditions, history and culture – have, since the 1970s, attempted to adopt a model of decentralisation, be it political or fiscal. According to the World Bank, more than 85 percent of democratic countries have implemented a certain form of decentralisation. But not all of them have been successful.

In an upcoming book project, he identifies the various origins of the local state (local government systems) and different levels of local democracy. In another book-length study titled “Local Democracy without Civic Tradition in South Korea”, he looks at South Korea’s adoption of decentralisation reform over the last two decades and the mixed outcome that has followed. For example, while decentralisation has facilitated local participation, detractors feel that in many respects, decentralisation does not fit into the Korean society as it lacks democratic civic tradition.

His findings, gleaned through fieldwork and interviews with senior government officials, show that beyond the simple diffusion of an idea, some form of localised interpretation is necessary. “We need to go beyond simple emulation to carry out careful assessment and policy translation. Feasibility studies are important when we adopt new ideas from other countries,” he explains.

Another related aspect of Professor Bae’s research studies how donor countries – particularly middle power countries like Sweden, Korea, Japan, Canada and Australia – are using foreign aid primarily as a tool of diplomacy without hard power. Instead of flexing their military muscle, donor countries prefer to exert soft power over recipient countries through the provision of Official Development Assistance (ODA).

Professor Bae’s studies also revealed two other trends: The first trend is the unmistakable rise of Northeast Asian countries as aid-givers, led by Japan, followed by South Korea, and increasingly, China. The second trend is the emergence of alternative ODA models of foreign aid that eschew the traditional American neo-liberal model, and are characterised by marketisation and efficiency-oriented reform. These alternative models include the Scandinavian model, which focuses on peace-building and humanitarian assistance, and the North Asian model, which emphasises the economic development of a country.

The reality that some non-traditional aid-givers are former recipients of ODA also paves the way for new models of assistance to evolve. “Now that they have become the aid-giver, these aid-receiver-turned-aid-giver countries may want to contribute to international aid assistance in different ways from previous models,” he adds.

The South Korea and Singapore models

Professor Bae cites South Korea and Singapore as two countries whose successful modernisation and industrialisation have relied heavily on borrowed ideas, and yet are popular among other developing countries because they are perceived to be achievable models.

“My work shows that there are alternatives to the traditional models of the West. In the future, contextualised models, like those of Singapore and Korea, may appeal to other developing countries, encouraging knowledge exchange and further contributions to the global development aid community,” he says.

South Korea and Vietnam have quite a close relationship when it comes to foreign aid, he points out. When Vietnam wanted to develop its markets and economy, it looked for an appropriate model to adopt. The US liberal market model did not work because it did not translate across well to Vietnam’s socialist government and authoritarian regime. Vietnam approached the South Korean government for assistance as the latter had developed its economy under similar circumstances.

His research findings also show that the traditional ODA model failed in many recipient countries because of a lack of an accompanying ‘socialisation’ model. “We found that a dual process was needed. First, recipient countries needed to recognise the middle power’s model as an achievable target. At the same time, donor countries needed to self-identify as a successful model. Without these two understandings, or what we call the socialisation process, the ODA model cannot be successfully implemented,” he says.

Professor Bae hopes to expand his research to study idea transfer in the private sector, especially in relation to innovation and technical knowledge. A paper he is currently working on about public-private partnership in infrastructure development may also create room for collaboration with other SMU faculty. “I am very keen to study the transfer of ideas between governments and businesses, as well as among businesses, and whether there is any overlap with the transfer of ideas among countries,” he says.