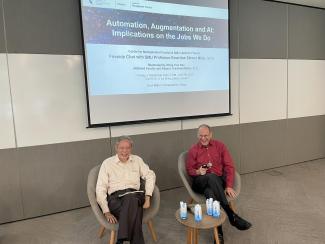 “To what extent should we drive automation and augmentation? It all comes down to the choices that every employer makes, or choices about government policies and incentives given. The future is not a function of technology, but a function of humans and the choices they make,” said Professor Emeritus Steven Miller. He was speaking at the inaugural Fireside Chat held on 2 September 2022. Organised by Singapore Management University (SMU)’s Centre for Management Practice in conjunction with SMU Libraries, the in-person event hosted students, faculty and staff members at SMU Li Ka Shing Library.

Themed ‘Automation, Augmentation and AI: Implications on the Jobs We Do’, the event served as a platform for Professor Emeritus Steven Miller to share his insights on the evolving relationship between how Artificial Intelligence (AI) is being used and its impacts on the nature of work and jobs. Moderated by Wong Yuet Nan, Affiliated Faculty and Adjunct Teaching Mentor, SMU School of Computing and Information Systems, the session offered members of the audience an opportunity to engage Prof Miller on his views during an interactive Q&A dialogue. In her opening remarks, Dr Havovi Joshi, Director, SMU Centre for Management Practice (CMP) shared that the joint session was to provide a platform for robust debate on pertinent issues and to deliver meaningful impact in a time of change, especially in areas concerning innovation, industry, and internationalisation. This initiative also aimed to bring together various partners, including SMU faculty and students, to build, improve, and share the collective body of knowledge on Asia from CMP and the broader SMU community. Conceptualised three years ago but scuppered by the global COVID-19 pandemic, the inaugural Fireside Chat series finally took place in-person on campus, a testament to the perseverance of colleagues working in collaboration to turn this event into reality.

“Let’s not hold AI up as a sort of holy grail. Let’s instead talk about how we can really understand AI,” Prof Miller commented, setting the stage for a pragmatic discussion at the start of the session. “In plain English, AI is giving machines the increasing ability to do reasoning, planning, learning, communication and perception.” Prof Miller summarised the ways in which AI is being used by businesses, governments, and the economies around the word. Since it was first introduced in the 1970s, many developments had converged, such that AI algorithms are now being deployed to make better predictions, understand language, enhance modelling and simulation, and for robotic process automation.

“Augmentation complements the human in doing the job. It is in fact an enormous complement in getting the job done,” said Prof Miller. As for augmentation’s impact on jobs and employment, he underscored two points about how there are more people employed in modern history than at any point in time, despite there being more automation and augmentation than ever. Second, automation and augmentation can create a productivity impact, that results in new jobs and careers being created within the ecosystem. To illustrate, Prof Miller gave the example of a new job title, such as a social media curator, becoming a reality with the use of AI in organisations.

“Interestingly, the biggest impact is not going to be on the number of jobs. It’s going to be on the nature of jobs,” commented Prof Miller. He cited an example of the trend of increasing numbers of gig economy workers, and the fact that labour was in short supply in 11 of the 12 largest economies around the world.

Within this context, Prof Miller argued that augmentation and automation are in fact critical for keeping up existing levels of output, and encouraged the audience to keep in mind how a wide range of job roles and skill sets are required to create, deploy, and operate AI-enabled tools and work processes.