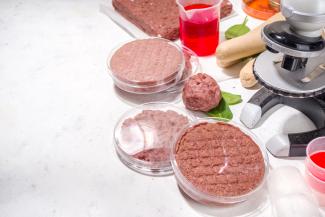 Singapore, 14 March 2022 (Monday) – The Singapore Management University (SMU) has published a study, “A cross-country investigation of social image motivation and acceptance of lab-grown meat in Singapore and the United States” in the reputable peer-reviewed journal, Appetite.

Spearheaded by Associate Professor of Communication Management (Practice), Mark Chong and Associate Professor of Psychology, Angela Leung, together with their student, Verity Lua, the study surveyed 616 Singaporeans and 759 Americans from July to August 2021. Americans formed the comparison group as the United States is potentially the biggest market in the world for alternative proteins and are ‘representative’ of western meat eaters.  The samples’ gender and ethnic make-up are representative of the population characteristics in Singapore (Singapore Department of Statistics, 2020) and the United States (United States Census Bureau, 2020).

Singapore scored “world-firsts” in the approval of commercial sales of cultured meat in December 2020 and in setting up of a commercial cultured meat production facility in July 2021.  This has opened the doors for more protein alternatives to be available and will contribute towards enhanced food security for the country.

On what motivated the study, Assoc Prof Mark Chong said, “Lab-grown meat is being promoted as an alternative to conventional meat, which has been linked to a variety of environmental and health risks. It has been touted as one of the novel food technologies that could help Singapore achieve its “30 by 30” food sustainability goal. Yet very little is known to date about consumer perception and acceptance of lab-grown meat, especially in Singapore.”

The research was conducted with three objectives:

i) To compare consumer acceptance of lab-grown meat in the U.S. and in Singapore.

ii) To explain the difference in Americans' and Singaporeans' acceptance of lab-grown meat by examining their eating motivations, specifically social image.

i) The analysis revealed that Singaporean participants had greater acceptance of lab-grown meat compared to their American counterparts.  The cultural difference was explained by stronger social image eating motivations of Singaporeans. This shows that cross-country differences in the motivation to eat for a favourable social image resulted in differences in consumer acceptance of lab-grown meat.

ii) The Singaporean cultural trait of kiasu-ism, which is exemplified by the fear of losing out or being left behind, may explain Singaporeans' motivation to project an image of being ‘trailblazers’ (vis-a-vis other nationalities) by expressing a higher acceptance of novel foods such as lab-grown meat.

iii) Results also revealed that the information about lab-grown meat being communicated by a celebrity or an expert SMI did not make a difference in participants' acceptance of lab-grown meat in both countries.

The research suggests an interesting implication that novel food industries and marketers can promote product branding by boosting media coverage (including online social media) of their lab-grown products' ‘firsts.’