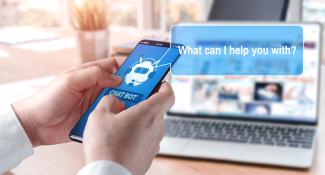 “When is the bus coming?” was the simple problem that Abhilash Murthy wanted to solve. He had been waiting for Bus 65 along Singapore’s Orchard Road for 25 minutes, but his bus was nowhere in sight. After putting in a long day at work, Abhilash was tired and hungry. He simply wanted to go home.

Even though there were several bus apps, he did not want to use any of them, as “there was too much information”. Neither did he want to walk to a bus stop where there was an electronic bus board that displayed the bus arrival times. Like the bus apps, the electronic bus boards also displayed too much information. He simply wanted to ask someone when the bus was coming.

Since Facebook Messenger had just launched chatbots on its platform, Abhilash decided to jump on the bandwagon to create a chatbot to solve the problem. Trained as a software engineer, he took only one weekend to hack out a chatbot prototype that he could ping to ask when the bus was coming. The chatbot prototype was later renamed Bus Uncle and given a persona that typified a Singaporean bus captain – grumpy, snarky, but helpful.

On October 23, 2016, Abhilash launched Bus Uncle to the public on his Facebook page. Despite little interest in the first four days, by the fifth day, the Singapore public took Bus Uncle by storm when Mothership, a popular local media, featured the chatbot on its platform. Within a day, Bus Uncle went from having 100 users to more than 8,000 users.

By December 2016, Bus Uncle had become Singapore’s most popular chatbot with 20,000 users who pinged regularly to ask for bus arrival times or simply to chat. “People love Bus Uncle because he is witty, sarcastic, funny, informative, and most of all, local and relatable. When you ask him when the bus is coming, his responses are exactly what you would expect from a Singaporean bus captain. He responds with lah’s, aiyo’s, jialat’s, walao’s. He also has a sense of humour. If your wait is longer than 15 minutes, he might even ask you to lim kopi (drink coffee in Hokkien)”, said Abhilash.

In that same month, Abhilash received a request from a worldwide digital media agency to advertise the BBC Player on Bus Uncle. Rather than pursuing the traditional route of advertising that was centred on pop-up ads, Abhilash suggested a new form of conversational advertising. Whenever a bus painted with “BBC Player” arrived at the designated bus stop, Bus Uncle would talk about the product. Given that this form of advertising appeared naturally in the conversational flow, no one complained about it. The success of the campaign led other organisations to reach out to Abhilash. By the end of 2017, Abhilash had worked on four conversational advertising campaigns.

As the popularity of Bus Uncle surged, invitations started arriving for Abhilash to share the Bus Uncle story. At these speaking engagements, Abhilash shared insights and his experiences for creating a successful chatbot.

Despite the initial success of Bus Uncle, Abhilash did not sit on his laurels. He continued to enhance the functionalities of Bus Uncle by incorporating feedback and input from his users. In December 2017, Abhilash launched Bus Uncle on Telegram, a social media messaging platform popular with university students. A few months later, in March 2018, he launched Bus Uncle on Google Assistant. Abhilash was also approached by Google to create a voice activated Bus Uncle-like chatbot for the launch of Google Home in April 2018. Many other opportunities followed as Abhilash’s reputation grew in this space.

By April 2021, Bus Uncle had amassed hundreds of thousands of users. Revenue was growing significantly at 300% year-on-year. And Abhilash now had a strong team that included Chan Yin Yin, who had joined him as co-founder and Chief Operating Officer. And Abhilash was only 29 years old and Yin Yin, 27 years old.

The business was renamed BotDistrikt , as the Bus Uncle name no longer was all encompassing for what the business stood for. BotDistrikt became the first Southeast Asian enterprise chatbot-building platform that focused on helping clients create chatbots that were human-like and conversation-based. It also offered a feature for the chatbots to be deployed to multiple platforms including websites, Facebook Messenger, Telegram, Skype, Google Assistant, and Amazon Alexa.

Set between September 2016 and April 2021, this case describes how Abhilash Murthy used the Digital Product Management (DPM) framework to create the Bus Uncle chatbot and subsequently, pivoted it to a successful digital business. The DPM framework combines Design Thinking, Lean Start-up, and Agile methodology, and it is a robust framework for developing digital products and solutions in the private and public sectors. The case is written by Wong Yuet Nan, SMU School of Computing and Information Systems Adjunct, Hoe Siu Loon, SMU Associate Professor of Information Systems (Practice); and Jovina Ang, SMU Adjunct Faculty.