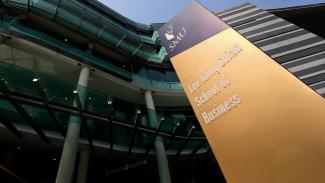 Singapore, 1 September 2021 (Wednesday) – The Singapore Management University (SMU) announced today that it has appointed Professor Bert De Reyck as the Dean of Lee Kong Chian School of Business (LKCSB).  He takes over the helm from Professor Gerry George who served as Dean from 2015 – 2021 and will assume the role for a five-year term.  Professor George has moved to Georgetown University and will continue his association with SMU as a Visiting Professor.

SMU Provost Professor Timothy Clark said, “I would like to take this opportunity to thank Professor Gerry George for his outstanding leadership and tremendous contributions to SMU and LKCSB, and the strong legacy he leaves. I am confident that Professor De Reyck, with his prior leadership experience and outstanding research and teaching achievements, will be able to build on this legacy and significantly contribute to LKCSB’s success as a leading provider of high-quality business education and propel it to greater heights of excellence globally.” Professor De Reyck’s appointment was very strongly supported by the SMU Board of Trustees, President, and other key internal and external stakeholders, and resulted from an extensive and rigorous global search that started in May 2020.

Professor De Reyck enjoys the reputation of being a dedicated educator, an inspiring leader and an able administrator who is highly respected by his colleagues. In accepting the appointment as the Dean of LKCSB, he said “This appointment is a real honour. I have followed the developments at SMU closely since its establishment twenty years ago and have always been very impressed by its accomplishments in such a short timeframe. Despite their short history, SMU and LKCSB have already established themselves as one of the leading institutes in Asia, and I am thrilled to have the opportunity to contribute to continuing that trajectory. I am also very much looking forward to working with the fantastic group of faculty, administrative leaders, students and alumni across LKCSB and SMU.”