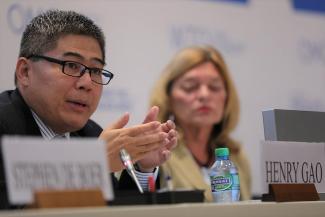 With the growing importance of the internet, Digital Trade has become a key issue in international trade regulation. Differing approaches to digital trade lead to inconsistencies or even conflicts in the rules on digital trade, which could increase costs for businesses. Consumers also lose out because sometimes they cannot use the same app across jurisdictions, such as the case of Google versus Baidu and WhatsApp versus WeChat.  If this trend continues, we could see further fragmentation in cyberspace which result in the “splinternet”, which would reduce the overall welfare for the world.

As the home to some of the largest internet companies in the world, the United States took the lead in bringing the issue into the World Trade Organisation (WTO) and has been the leading proponent on the issue. In contrast, developing countries were quite sceptical and reluctant to engage in discussions on the issue.

Recently, however, several developing countries have changed their positions and become more active participants. Chief among them is China, which has raised some interesting proposals both within and beyond the WTO. The issue also emerged as one of the main issues discussed at the WTO’s 11th Ministerial Conference (MC11).

In 2016, Associate Professor of Law and Lee Kong Chian Fellow, Yong Pung How School of Law (YPHSL), Henry Gao made a presentation at the “WTO at 20” conference about the approach of the US to digital trade issues in trade agreements. As there was no paper comparing the approaches of the US and China then, he decided to research on the issue and wrote a paper “Digital or Trade?”, which became the first comparative study of the American and Chinese approaches.

The paper provided a critical examination of the contrasting approaches of the US and China on the issue. It argues that the US approach tends to focus more on the ‘digital’ nature of digital trade, while the Chinese approach prefers to address the issue from the traditional ‘trade’ perspective. The article analyses the reasons for the different approaches and provides suggestions on how to move forward on the issue at MC11 and beyond, given the differences between the two approaches. On his hopes for the outcome of this trade issue, Assoc Prof Gao said, “I hope that both US and China can first identify the areas of agreement, then try to narrow their differences on issues where they differ. The key concern for China is national security. So if an agreement provides sufficient mechanism to address this issue, then China might be willing to agree to issues which the US deem as essential, such as free flow of data and prohibition in data localisation requirements. We are already starting to see some convergence, for example in the RCEP concluded at the end of last year, where China did agree to these issues.”

The paper, published in mid-2018 in the Journal of International Economic Law (JIEL), was among the top four articles that contributed to the Journal’s  2019 Impact Factor (the average frequency that an article in a journal is cited in a particular year, which in turn reflects the importance of a journal based on the number of times its articles are cited). The Journal also scored the highest impact factor in its history the same year.

Before the article was published, it earned Assoc Prof Gao worldwide attention which led him to invitations to participate in the work of international organisations like APEC, WEF and WTO, among many others. The list of his contributions to the Digital Trade issue can be viewed in the Annex.

Assoc Prof Gao said, “I’m honoured by the international recognition on the paper, which demonstrates SMU's expertise on important emerging issues such as digital trade. With the establishment of the new Centre for AI and Data Governance (CAIDG), SMU will make greater contributions to the research on digital trade and become a thought leader in this regard.”

Assoc Prof Gao was also recently appointed to the editorial board of the Journal of International Economic Law (JIEL), which is dedicated to providing thought leadership to subjects concerning the relation of law to international economic activity. Published by the Oxford University Press, it is the highest-ranked journals on international economic law, and one of the highest on international law in the world. In his role, Assoc Prof Gao will be reviewing the editorial policies and paper submissions together with other multinational board members.

“I’m also greatly honoured by the appointment to the JIEL editorial board, which is a great testament to the research excellence that SMU law school has achieved despite being a young school. With its excellent research record, SMU will definitely see more of such appointments in the future,” said Assoc Prof Gao.