In the United Nations Human Development Report last year, Singapore ranked 11th out of 162 countries for gender equality. In 2019, the literacy rate for women was 96.1%, and of residents aged 25 years and above and having a university degree, 50.8% are women. In 2020, the employment rate for women was 73%.

Women in Singapore have progressed significantly over the years, but more can be done to examine issues that affect women at home, in schools, workplaces and the community. The pandemic has also led to changes in the lives of Singaporeans, potentially creating a “new normal” in how we function at work, at home, and in society. These changes have the potential to transform the lives of women and girls, offering them the opportunity to overcome traditional obstacles that have limited their social and economic advancement. But it also carries the risk of perpetuating — or even exacerbating — existing gender disparities across multiple domains.

These were some of the gender imbalance issues raised and discussed at the virtual IPS Women’s Conference 2021 held on 3 June. The conference was held amid an ongoing series of Conversations on Women Development, as part of a national review of women's issues. Since last September, the Government has partnered civil society, business and community groups to better understand citizens' aspirations for Singapore women, and has held about 100 conversations involving more than 3,300 participants.

In her opening address at the Conference, President Halimah Yacob had said that a whole-of-society effort was needed for societal norms and practices to change and better support women. She added that “the issue is not just about securing rights for women, but also giving them the respect and appreciation they deserve for their contributions and sacrifices, and all of us are in a position of influence to do so…. With respect as the cornerstone of the rapport between women and men, we can create a society where every woman and man can achieve their aspirations and fullest potential." You can read her speech here.

There were a total of four panel discussions at the day-long conference: Panel 1 – Equal Work, Equal Pay; Panel 2 – Home is where the work is; Panel 3 – Mindsets and Minefields and a Closing Panel which aimed to wrap up the day’s discussion as well as hear insights from Minister for Home Affairs and Law, Mr K Shanmugam and Member of Parliament Sengkang GRC, Ms He Ting Ru.

The Singapore Management University (SMU) is proud to have SMU President, Professor Lily Kong, who is also the first female president of a Singapore university, share her views and moderate; and Dean of Students and Professor of Sociology (Practice) Paulin Straughan speak at this conference.

Prof Straughan spoke on the topic “Home is Where the Work is – Division of Domestic Labour” and shared her views on how Singapore should invest in building neighbourhoods with infrastructure that can encourage people, in particular, those over 60 years of age who are an untapped resource – to volunteer and help those who need a hand within their area. She spoke of how housework and caregiving constitutes unpaid work that has traditionally been undervalued. “But aside from being economically valued, what women need is more respect and recognition of the role they play and efforts they put into caregiving”, she added. 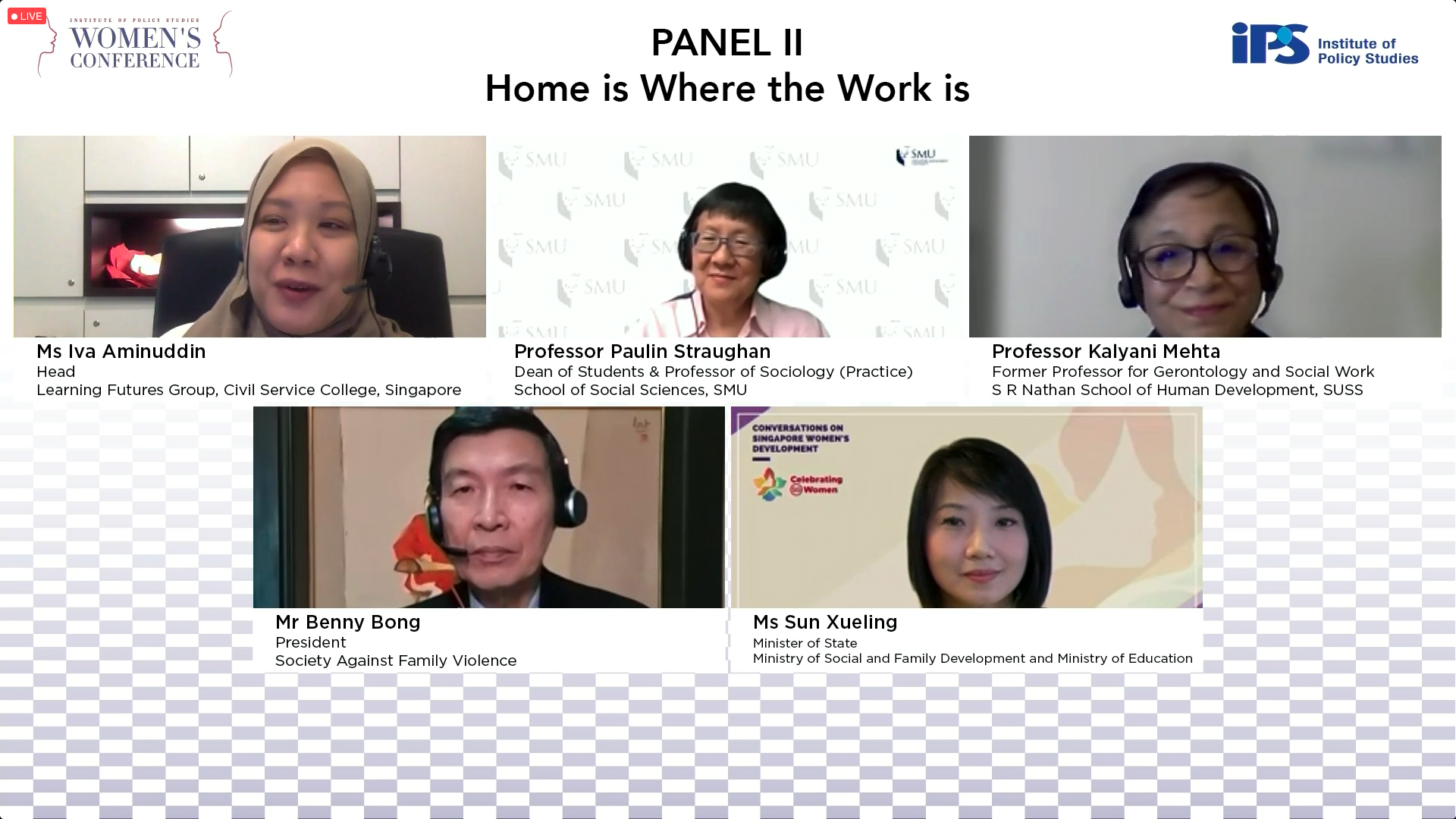 During the course of the 1.5 hour closing dialogue moderated by Prof Lily Kong, Minister Shanmugam and Ms He discussed topics that included the involvement of men in achieving equality for women, parental leave policies, workplace quotas, single-sex schools and the role of the media in reinforcing gendered stereotypes.

Minister Shanmugam spoke of making mindset changes and reassessing our most deeply held beliefs in society, to work alongside legislation. He also discussed how unconscious biases are typically hardcoded from young and imprinted deeply into our collective consciousness. Touching on legislation specific to gender equality, he said, "We should not rule out legislation. However, we should also understand that legislation alone is not going to solve the problem (of gender inequality). It requires a mindset change … You need legislation to form a framework, but you also need people to accept and understand it. You need men and women to say it is important for society and for the country." You can read Minister Shanmugam’s speech here.

Ms He Ting Ru spoke of the need to break away from traditional measures of women’s success, as well as the need to empower women to stand up for themselves. On sexual assault, she shared that the root of the problem was the objectification of women and the lack of people standing up to misogyny in society. She highlighted the need to shift away from traditional measures of women’s success and not to view work traditionally done by women as being inferior; or true equality will be hard to obtain. 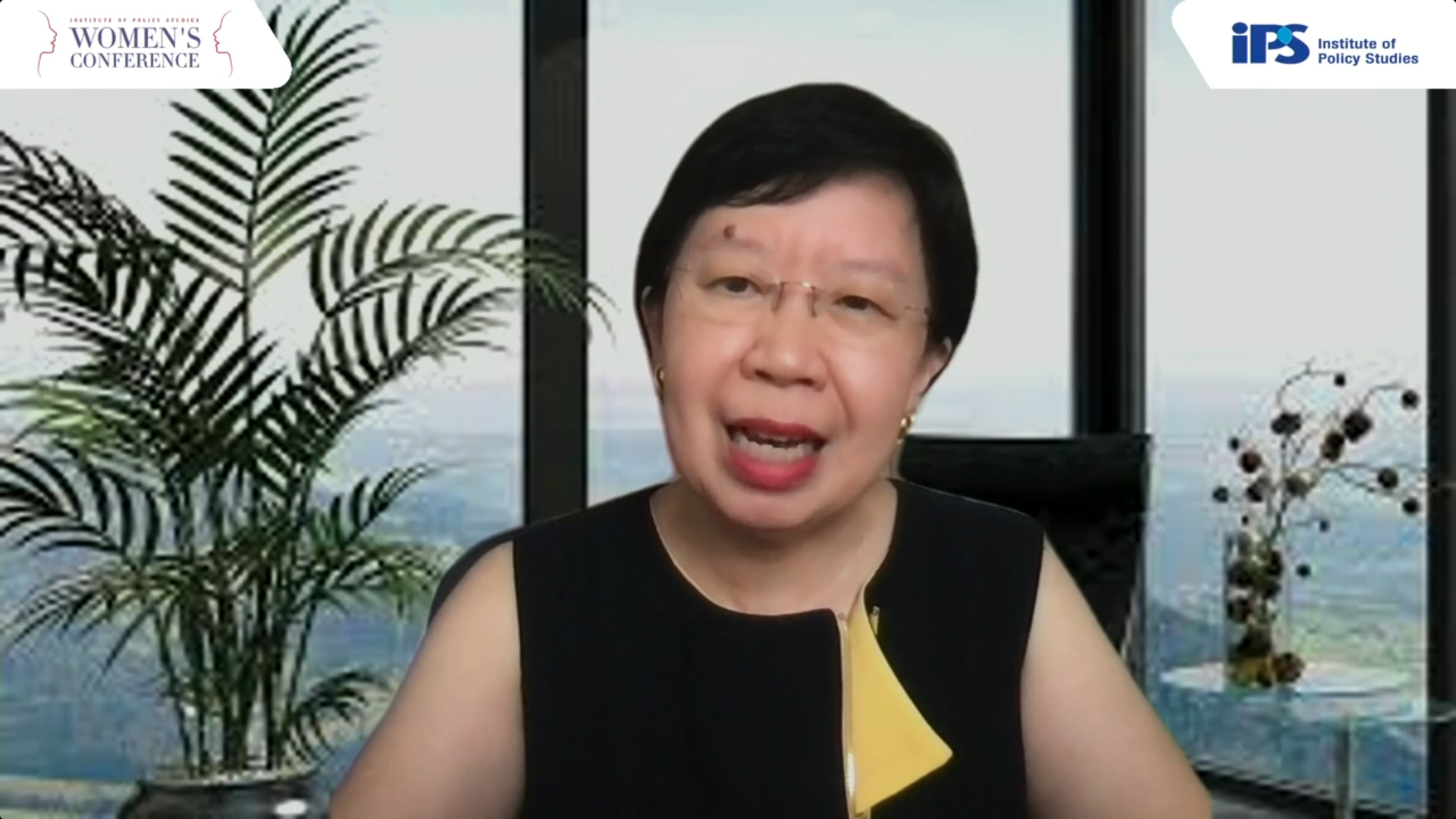 In summarising the session, Prof Kong remarked that the panels had covered a lot of ground, pointing out different social groups within “women” – singles, married and even foreign domestic workers and multiple “sites” where gender experiences converge and collide – schools, family, workplace, boardroom and media. Panellists had also discussed ways in which mindsets can be changed ranging from amending a powerful symbol such as the pledge, to hard legislative changes, and making policy changes such as parental and eldercare leave to recognising invisible care. Beyond these, Prof Kong said that the marketplace had a role to play as well and “businesses should take this seriously and not just follow legislation. If they believe in a cause, then they need to put in resources to look into facilitating gender equality”. In closing, she said that a combination of government, market, community is required to shift the needle of men and women’s mindsets.