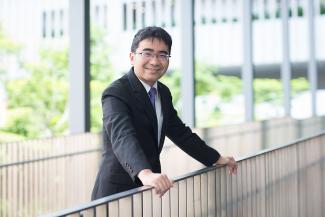 Dean of Yong Pung How School of Law (YPHSL), Goh Yihan spoke with Lianhe Zaobao about his legal journey, his passions, and aspirations for the law school in a special feature published on 16 May 2021.  An excerpt of the article translated to English can be viewed here.

Professor Goh Yihan, appointed a Senior Counsel in January this year, became SMU's Dean of Yong Pung How School of Law (formerly known as SMU School of Law) four years ago, at the age of 35. He is the youngest Dean in SMU’s history. In this issue of "People: Face-to-Face", the humble and down-to-earth Goh Yihan shares the challenges of leading the law school, his expectations towards the law school, the considerations behind the selection of law students, as well as his unusual stargazing hobby.

As an alumnus of NUS Law School, he is proud and honoured to be the Dean of Yong Pung How School of Law.

He emphasized that the focus of the law school is still on preparing students for the legal profession and hopes that they can also succeed in fields outside of law.

"As a younger law school, we have more enthusiasm and energy to explore new growth areas, such as the mediation of legal and technological disputes, and cross border business law."

He pointed out that during the epidemic, the greatest challenge was to ensure that students continued to have access to a high standard of education, and that they could be assessed fairly and objectively.

“I am proud that the faculty and staff rallied together, collectively with the University, to meet these objectives.”

A most sharp legal mind

When Goh Yihan was studying at NUS Law School, he won Best Oralist in the university moot court competition; he topped his cohort in the second year at university and won a scholarship.

In 2006, Goh Yihan, who obtained the First-Class Honours, was not only the top graduate of the law school who received several awards including the Lee Kuan Yew Gold Medal (Best Graduate), he was also the valedictorian of that year.

After graduation, he took on the posts of Assistant Registrar and Senior Justices' Law Clerk of the Supreme Court. During his tenure, he assisted former Chief Justice Chan Sek Keong, Court of Appeal judges, and High Court judges in research work. His expertise includes the Law of Contract, The Law of Torts, The Singapore Legal System and Statutory Interpretation.

He has been appointed by the Supreme Court as an "amicus curiae" (Friend of the Court) for five times and has provided the Court of Appeal with independent and professional insights, which are typically unusual and novel legal views or views related to important public policy issues.

He has also earned accolades from the Supreme Court's Panel, headed by the Chief Justice.

In 2015, in the case against Thomson Medical (which has been renamed Thomson Medical Centre after the acquisition) for an IVF mix-up, Goh Yihan submitted his independent views at the Court of Appeal as amicus curiae or “friend of the court” to a panel of five judges. In the written judgement, the Judge of the Court of Appeal, Andrew Phang represented the five judges and thanked Professor Goh for his assistance and spoke highly of it: “Notwithstanding the fact that we did not ultimately agree with all of his submissions, his masterly integration of theory and practice exemplifies all that excellent legal scholarship should be. We also commend Prof Goh for his excellent advocacy.”

From September 2016, SMU conducted a global search for a Law Dean, which lasted nearly half a year. They did not find a more suitable candidate than Goh Yihan, and thus the 35-year-old became the youngest dean at SMU.

Speaking of the toughest decision he had to make when managing the law school, Goh Yihan mentioned the process whereby he had to fight for $20 million in research funding.

More than four years ago, near to the start of his deanship, there was a grant put out for a 5-year research programme on Artificial Intelligence governance.

“This had come at a time when we identified law and technology as an area to focus on. However, the grant call had come a bit early as we were still building up our new capacity.”

“The grant call involved putting together a detailed proposal which may at the end of the day, yield us nothing. However, we decided to go ahead in any event. We reasoned that, no pain, no gain.”

“If we just stood still, we would never improve; if we did not dare to take risks, then we will always remain what we are, while the world sails along.”

He said, “We realised later that we had far more capacity than we thought we had. Faculty all came together, volunteering to venture into new law and tech areas that they had not researched in. We were carried forward by the energy and enthusiasm of so many.”

“Our partners in the profession and other law schools also supported us relentlessly. In the end, we won the grant, and it was the largest grant we won in the history of the law school, by a factor of over 20 times.”

Goh Yihan said, “The success gave us a confidence booster. We would go on to receive further grants totalling some over $20 million in the next few years.”

The money will be used to fund the two law and technology centres, namely the Centre for AI and Data Governance, and the Centre for Computational Law.

The former has received a government grant of $4.5 million and was established in October 2018.

The Centre's research projects include exploring the effects of Artificial Intelligence and Data Technology on the transformation of local labour force, the challenges and opportunities facing the financial system and international trade, as well as the legal, ethical and regulatory issues related to Autonomous Vehicles.

The Centre for Computational Law has received a grant of $15 million to research and develop open source for "smart" contracts and "smart" legal clauses, so that laws, clauses and contracts can be presented as code.

“The aim of the research is to create legal tools for the future. These include software for drafting to ensure correctness and completeness of legal documents.”

Goh Yihan pointed out that the road to building the law school of the future is long, and everyone is reasonably happy with the achievements thus far.

In addition to working with colleagues to strengthen the law school’s research work, he is also involved in the design and revamp of the curriculum and building of networks with academics in local and overseas universities, as well as practitioners from the legal fraternity around the world.

"If students want to study in China, we will try to provide support."

Looking for diligence, creativity and passion to help people when selecting students

Local law schools have limited places and face fierce competition for student enrollment. In addition to exemplary academic performance, most applicants also actively participate in community activities to add value to their resume.

How does SMU’s law school select students and what do they value?

"We are looking for diligence, creativity and passion to help people.”

He said, diligence because law is never easy, it requires much reading and hard work. “You can be very smart, but if you do not put in the hard work, then you will not do well in law.”

He pointed out that law is never static, hence the School wants to look for creative students.

“Law is not just about applying rules to facts and coming up with an answer. Rather, for society to prosper and laws to remain relevant, laws must constantly evolve.”

“As lawyers, we play a role in that, through our time before the courts or through other endeavour.”

“Finally, at the heart of the legal profession is its noble roots in being of service to others. Being skilled in law is a privilege and a responsibility, so we need to pay it forward in society.”

Surrounded by bright students all the time, what does Goh Yihan think of students now, in general?

“In the past, we did what we were told, students these days need to see a purpose or mission in what they do. If they see that, they will put in a tremendous amount of effort into what they do.”

“That is an admirable trait because it shows that the energy of youth can be harnessed, if we give them a sense of purpose.”

Over the years, there has been a surplus of lawyers, but Goh Yihan is not worried about the future of graduates.

Referring to the MOE’s Graduate Employment Survey in November 2020, he points out that the employment rate of SMU’s law graduates was as high as 95.5%.

"They won't be faced with not being able to find a job, but rather they may not be able to enter the law firm of their choice.”

Graduates these days are not limited to legal work, they have more career choices, and they can also practise overseas."

When asked how he unwinds after a stressful day,

His favourites include American dramas "The Practice", "Suits" and "CSI".

However, unknown to many, he is a lover of astrophotography. The number of telescopes he owns is as magnificent as his book collection, consisting of over 20 telescopes of various makes and focal lengths. Goh Yihan’s father inspired him to take up this hobby and his interest in astronomy when he was a young boy. But it was only after he started working and could afford to buy the equipment himself, did he then buy his first telescope and travelled overseas for stargazing activities. He likes to take photos of celestial objects like planets or nebula. “Like the law, astrophotography is a process that involves many moving parts. You need to align your mount, you need to focus the telescope, you need to make sure your camera is at the proper back-focus distance from the lens, you need to make sure the processing is done right. It is deeply satisfying when everything comes together.”

Under the vast interstellar world, Goh Yihan feels insignificant and realises that one should learn to let go sometimes, and not be too critical or take things too seriously.

Stayed home to look after his son after his birth

Before becoming the Dean, he often went to Mersing, Johor, Malaysia to engage in stargazing activities with his like-minded friends.

He said that he is now stargazing at home, "if the baby cooperates, that is", not forgetting to add in a "disclaimer".

Asked about his happiest moment in life, he replied, “When my son was born.”

To let his wife have enough sleep, this nanny-dad takes on the night shift, but his son is still unable to sleep throughout the night, so he often has to get up in the middle of the night to take care of him.

"I am very grateful to my wife. She sacrificed a lot to take care of the baby. Compared to her, what I did do is nothing. After having a child, we also deeply appreciate the care given by our parents, and we are all very grateful."

When Goh Yihan stood up for a photo at the request of the photographer, the reporter noticed that he seemed to have become one size smaller, hence the question: “have you lost weight?”

He showed his signature boyish grin once again, made a hand gesture of rocking the child, and with a smile, he said, “that might be the reason”.