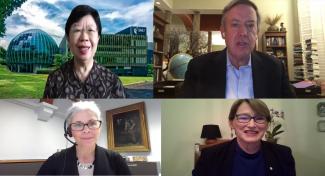 Higher education in Asia may be experiencing tremendous growth, but there has also been a strong desire to pivot towards a research-intensive university model. Universities focusing particularly on research and which are assessed in the “global currency of citations”, may risk overlooking local needs. This was one of the topics discussed at the Times Higher Education (THE) Innovation and Impact Summit on 20 April 2021.

“The kind of work that has local impact for the immediate community can be lost in that kind of race for a particular model of universities,” said SMU President, Prof Lily Kong, at a virtual panel discussion titled “Are Universities Really a Progressive Force for All?” In line with SMU Vision 2025’s strategic priority of "Growth in Asia", where the University seeks to share good practices and gain understanding of Asia’s economy, polity and society, Prof Kong was sharing her views on the limits that universities faced in terms of their impact and responsibilities.

Organised over four days, the global Summit was conducted virtually and attended by some 800 participants from the higher education sector across 75 countries.

Citing the needs of first-generation college-goers, and those who were already in the workforce but required upskilling or reskilling as examples, Prof Kong said, “We run the risk of doing a disservice to the larger population by excluding students from certain opportunities because of the particular research model that universities are going after.”

Concurring with Prof Kong’s view that universities, “unequivocally”, are not a progressive force for all, Dr Crow said, “Our products have become so significantly powerful, and so transformative at such a rapid speed, that we’re leaving behind a trail of those not benefitting from our discoveries, inventions, educational outcomes, or access to our educational opportunities”.

Prof Fortier agreed that accessibility was central to the debate. She commented, “There’s an upward trend of people getting education across the world. But if we dig a little deeper, there are many differences. Even in our communities and cities, when you look at different neighbourhoods, you see differences in the ability of people to access education. People talk about education as a ladder for social mobility, but not everybody has access to that ladder.”

The university leaders also exchanged views on whether it was conceited of universities to be aspiring to change the world. Prof Freshwater felt that while universities would want their graduates to be ambitious in wanting to transform the world, they ought to recognise that they would not be able to do so alone as “there is far more in the peripheral vision that we can see”.

Prof Kong opined that the notion of the world would be different to different people and suggested that universities “can make a difference to the different worlds at different scales”.

Pointing out that it was not an either-or situation, she asked universities to consider the many opportunities to make meaningful impact on their immediate communities, even as the sector continues to contribute to debates and research efforts to address global challenges.