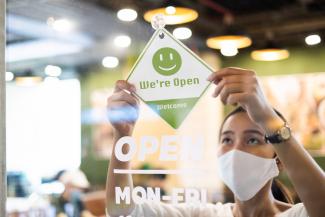 Thailand’s crisis response during the early phases of the global Covid-19 pandemic had been impressive. As at August 8, 2020, the total number of cases was 3,345, with only 27 cases added in the final week of July 2020. The kingdom’s success in the relatively swift reopening [from lockdown] and control of infection and deaths spurred spirited discussions on its achievements. How did Thailand succeed? What did the country do and avoid in order to achieve such accomplishments?

Thailand saw its first case of Covid-19 infection on January 13, 2020. The patient, a female tourist who flew in from Wuhan, China, marked the first non-China Covid-19 case worldwide. In about a fortnight, the first local transmission was reported. The early wave of infection reached its peak when the number of confirmed cases hit 789 cases in the week of March 23, 2020. Most cases were concentrated in Bangkok. On advice from Thailand’s special taskforce for the pandemic response, Centre for Covid-19 Situation Administration (CCSA), the government declared that the country would enter a state of emergency the next day. Apart from flights that were bringing overseas Thai citizens home, all international inbound flights were halted in April 2020.

Up until early August 2020, the country had seen six phases of reopening, allowing businesses to bring in foreign visitors, including migrant workers and selective medical tourists. However, most Thais remained cautious and concerned that this gradual opening up might invite a second wave of infection.

The kingdom’s success in the relatively swift reopening and control of infection and deaths was attributed to its ‘whole-of-society’ approach, involving public, private, and people (i.e., volunteers and NGOs) sectors. It was believed that Thailand, as well as many Asian societies, had experienced better success than other regions, such as Europe and the U.S., in coping with the Covid-19 outbreak due to their encounters with previous public health crises. For example, Singapore, Malaysia, Thailand, South Korea, and China were scarred by the 2003 SARS epidemic that had killed hundreds and infected thousands globally. This experience prompted significant reform and improvement of their public health crisis response capabilities. Their public health systems were also tested and further toughened by the 2009 H1N1 pandemic and the 2015 MERS outbreak.

While the task of keeping the coronavirus at bay remained daunting, another crisis had come to the fore as the crisis unfolded. The pandemic had exacted a tremendous blow to Thailand’s economy, particularly to the tourism sector, which had been the lifeblood of the kingdom’s economy. Foreign arrivals had plummeted by two-thirds in the first half of the year to about 6.7 million people. This was a stark contrast to 2019 when the country saw close to 40 million tourists.

Despite the need for foreign tourists as a lifeline, the government was still guarded about relaxing border restrictions. The Thai public remained concerned that foreign arrivals might trigger fresh surges of infections, reducing their ‘whole-of-society’ efforts and accomplishments to naught. Furthermore, plans to put in place ‘travel bubbles’ or ‘green lanes’ had to be suspended due to the rising number of cases in Asia, such as in Hong Kong (ranked #11 on foreign arrivals) and Japan (#6), which were the two prominent sources of tourists for the country.

Businesses, small and large, were floundering, with many Thais adjusting to telecommuting or working from home (WFH). WFH was not a traditional arrangement and many Thai firms struggled to make the transition. This new normal would likely remain as the business-as-usual scenario for a long while.

How could the economy be reopened safely and sustainably? How would the Thai society work, live, and play at home when so many were telecommuting? What are the critical decisions that the country should focus on?

This teaching case is written by Aurobindo Ghosh, Assistant Professor of Finance (Education) Singapore Management University (SMU); and Dr Wee-Kiat Lim, Centre for Management Practice (CMP), at Singapore Management University (SMU), with Dr Amit Haldar and Kalyan Bhaumik. The case can be used in class to examine the characteristics of new types of crisis, helping students identify the components of a crisis and its associated actions and activities. It prepares them to discern the complexities behind crisis decisions, particularly the tensions and trade-offs that decision makers have to confront.