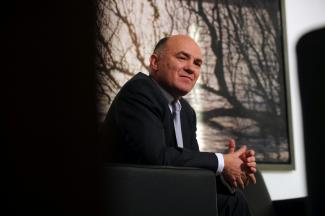 Singapore, 30 December 2020 (Wednesday) – Past and present staff of Vitol Asia have come together to make an endowed gift of $14 million to set up the Ian R. Taylor Memorial Fund (IRT-MF) at the Singapore Management University (SMU) in honour and memory of the late Mr Ian Roper Taylor  (7 February 1956 – 8 June 2020).  Mr Taylor was the former chief executive and chairman of the Vitol Group who transformed the small Dutch fuel merchant into the global commodities powerhouse that it is today.

Widely regarded as a pioneer of global commodities trading, Mr Taylor expanded Vitol’s operations in Singapore and grew its Asian coverage extensively through the hiring and nurturing of local talent. The IRT-MF commemorates the life of Mr Taylor as an Oxford graduate and patron of young Asian talent through a series of scholarships, awards and programmes at SMU.

SMU President Professor Lily Kong said, “We would like to express our sincere appreciation to Mr Taylor’s family and our donors for setting up this Memorial Fund at SMU and entrusting it to SMU’s stewardship. The Fund demonstrates Mr Taylor’s vision of a world enriched by cross-cultural interactions and cross-disciplinary collaborations. The scholarships and awards supported by the Fund will further encourage our students to scale new heights of excellence to become individuals who have an independent mind, are dependable in deeds, think deeply and broadly, and who act to create value at home and abroad. This gift is a strong testament to the donors’ confidence in our transformative education and the quality of our graduates. It will no doubt create a positive and lasting impact on SMU.”

Former President & CEO of Vitol Asia Dato’ Kho Hui Meng said, “Mr Taylor has always been a strong advocate for the development of future talent in Asia. He believed in a limitless world where students from all backgrounds should be nurtured and given opportunities to grow and contribute to society. He believed in collaboration across countries and sought to frequently build partnerships and leverage opportunities in every corner of the globe. We are pleased to endow this legacy in honour of his life and to commemorate his impact on this world.”

The IRT-MF will provide funding support to the following scholarships, awards and programmes starting from Academic Year 2021-2022:

Two full scholarships valued at $60,000 each and tenable for the full four-year duration of an undergraduate’s University education, will be awarded each year to help finance the education of Singaporean students at SMU.

Two full scholarships valued at $100,000 each and tenable for the full four-year duration of an undergraduate’s University education, will be awarded each year to the most talented and promising students from developing Asia studying at SMU.

This $3,000 award will be presented to the best graduating student from the Politics, Law & Economics major at SMU each year, as determined by an internal committee.

SMU’s multiple award-winning international moots programme offers students a unique opportunity to marshal various complex areas of law into coherent positions that are argued against teams from some of the world’s top law schools. The IRT-MF will provide support to SMU teams participating in top international moots competitions.

Mr Taylor believed in a globalised world and had a deep knowledge and understanding of different cultures. Throughout his career, he frequently sought to build partnerships and leverage opportunities across the world.

In remembrance of Mr Taylor as an Oxford graduate, a first-of-its-kind collaboration between SMU and the University of Oxford will be established which reflects the global visions of Mr Taylor. Details of this collaboration will be shared at a later stage.