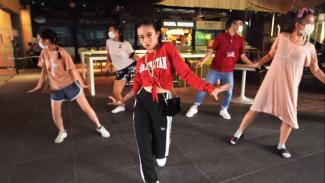 They had planned for an artistic tour de force in anticipation of SMU’s 20th Anniversary. And then the pandemic struck.

Initially deflated but definitely undaunted, the Office of Student Life (OSL) team regrouped to formulate a battle plan for SMU Arts Festival 2020: they would challenge Covid-19’s many constraints head-on, and give SMU’s hallmark arts event a complete digital makeover.

Thus began months of online brainstorming which raised – albeit agonisingly - the team’s creativity to a whole new level. They decided to take advantage of the world in context to drive the festival forward.

“We wanted to give our students an avenue to showcase their artistic talents while underscoring the role of arts even, and especially, in a world under lockdown,” said festival director Seah Wee Thye, who heads OSL’s Arts, and Creative Experience and Partnerships teams. “We came to a consensus that A-PART would be an ideal festival theme to reflect a crisis which divided but also united us,” he added. But the real test came from sifting elements from previous festivals’ success templates and translating them effectively onto a new platform. In doing so, they could not just transfer what they had been doing; they had to transform.

“We would be the first local university to produce a fully online arts festival, so we wanted to set standards high, and that became a motivating factor for us. Thus, we decided that there would be no simple music videos or plain recordings of performances,” explained Wee Thye.

The team worked with more than 350 students from 11 arts clubs to come up with creative concepts that supported four key goals:

Interactive engagement, so audiences would be able to digitally interact and participate in programmes to navigate and curate their individual festival journeys;

Industry involvement, by engaging art professionals and alumni to mentor, coach and perform with students, and;

Internationalisation, where works would be fine-tuned to suit cyberspace and its potential global audience.

Coupled by a timely festival theme and the refocus of goals, the bar was raised for performers.

Third-year business student Jasmine Goh, who is president of hip-hop club SMU Eurhythmix revealed: “We did not want to disappoint our community, so we pumped in long hours discussing how to create a refreshing project – one that everyone could relate to and at the same time, reflect on.”

Eight parts of a whole

After rounds of deliberations, eight original ideas were finalised into the core festival programme.

PHASES by photography club SMUSAIC was one of the more straightforward pieces to produce and translate online. Images of 20 former students from the past two decades, and their accompanying anecdotes, documented how they shaped SMU’s arts scene, which in turn significantly influenced their life journeys and how they coped with the pandemic, as artists. The virtual gallery was curated and put together by visual artist and professional photographer Hong Huazheng, himself from SMU Class of 2009. In HOMEBOUND, SMU Symphonia adapted the classic children’s symphony, Peter and the Wolf (the latter, a metaphor for the dreaded coronavirus), and turned it into a digital music picture-book. The fairy tale set-up gave viewers the option to either read-through or click-through, enabling an immersive storytelling experience. SMU Symphonia alumnus from the Class of 2009, Joshua Lim, who is now a stage and TV actor, narrated the story.

Likewise, StageIT’s original made-for-screen play, UNMUTE, allowed audiences to decide the outcomes for three lead characters as they deliberated internships, withholding information or reacting to one other. The intertwined stories were inspired by first-hand encounters by everyday Singaporeans adversely impacted by the pandemic. SMU Chinese Orchestra’s (SMUCO) TO GATHER featured a four-episode mini documentary series about SMUCO’s community collaboration with three special needs musicians. The series traced their resilience overcoming difficulties brought about by physical distancing measures and culminated in a finale where the entire orchestra performed “together”- with the help of sound and video editing. TO GATHER was supported by Central Singapore Community Development Council (CSCDC) through the Do-Good Grant@SMU. Finally, CO-BEAT! featured SMU Eurhythmix at their satirical best as they threw in locks, pops and attitude to convey behavior gone haywire during the pandemic. Tongue-in-cheek choreographies captured everything from social distancing, handwashing, (over)sanitising, and (not) masking up to panic buying, food hoarding and home-based learning - most of the time turning the spotlight on the nasties amongst us. SMU Eurhythmix brought back club alumni to mentor and coach their current dancers.

To up the participatory element in this year’s festival, audiences were invited to submit their own works in relation to the eight core productions in a segment called PLAY-A-PART. While it all seemed well thought out in black and white, execution of the productions proved a hefty challenge, especially since rehearsals could only take place during Phase 2 of the Circuit Breaker period where safety measures had to be strictly adhered to. This meant that groups of only up to 10 masked performers could gather, rehearse or perform for recordings at any time or place. Given that more than half of the featured CCAs far outnumbered this guideline, the team had to get really creative.

Choreography was tweaked mercilessly and large ensembles had to be split and filmed separately, before being edited to simulate them performing as a whole. Massive amount of time was also spent coordinating and casting guests and student performers so they stayed within permitted numbers while the latter remained in their respective cohorts.

Second-year business student and SMUCO’s honorary financial secretary Choi Zi An recalled: “It was a big project with many parties involved, so it was extremely tedious just to coordinate and gather people.” Seow Wei Long, who is a second-year student from the School of Social Sciences and creative lead of SMU Symphonia’s HOMEBOUND added, “Many of us had to get used to Zoom rehearsals and we could only play our instruments at certain hours at home so as not to disturb neighbours.”

When production finally went underway, there was also the arduous task to keep equipment sanitised to ensure that things and people remained as germ-free as possible. Needless to say, everyone felt that the countless hurdles made the journey exponentially bumpier. A variety of video production houses had to be enlisted to produce content and in some instances, students produced their own videos to scale down reliance on external resources. Staff members from SMU’s Integrated Information Technology Services team also provided invaluable contribution to the festival website and its user interface. Apart from consulting, they helped develop sorting tabs and voting buttons for the website, which festival director Wee Thye said his team was eternally grateful for.

With challenges prioritised and slowly worked out of the way, pieces of the programme puzzle began to fit into the A-PART jigsaw. What seemed once far out, soon appeared within reach.

Said Zi An, “I thought that it would be impossible to complete the project because it seemed so complicated. But we managed to produce a meaningful product in the end and I feel a great sense of accomplishment!”

Incredibly, everything slotted into place in the nick of time for the Festival’s virtual opening on 2 October. Industry guests and the university’s Board of Trustees and senior management who had attended the preview echoed a unified view: they were all wholly impressed by the show of dedication and talent brought to life on screen despite so many constraints.

Wei Long was ecstatic to be part of the Festival, and summed up his journey succinctly on behalf of his peers: “We got to dabble in something outside our comfort zones, learn more about ourselves in the process, and give our community some entertainment respite during this challenging time!”

Fast forward to the end of a successful 29-day run, A-PART showed itself to be a stand-out. SMU’s maiden virtual Arts Festival garnered a whopping 38,000 page views (with over 23,000 unique viewers and 73% first-time visitors to an SMU event) – more than 10 times the total audience from last year’s physical instalment. Audiences also contributed 135 personal works – which ranged from origami animals to original haikus - for the PLAY-A-PART segment. Furthermore, the Festival not only realised its goal to entertain and uplift the morale of an international audience, with 8% registered overseas viewers, but will continue to raise funds till end-November for the SMU Resilience Fund which supports students financially impacted by the pandemic.

These figures would not have been attainable at any other time, but in a strange year like this, resilience, creativity and hard work certainly helped raise the tally. And ironically, it was an ambush by a global pandemic that made such a feat so serendipitously possible.