Does having more money and resources increase one’s happiness?

Does having more money and resources increase one’s happiness? 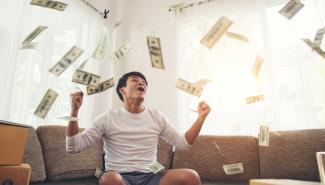 Singapore, 27 October 2020 (Tuesday) – In the famous words of Mark Twain, “Comparison is the death of joy.” Indeed, a new study found that people with higher subjective socioeconomic status — their perception of their income and educational standing compared to others — reported significantly higher levels of happiness. This relationship was also significantly larger than the connection between people’s actual income or educational attainment, and happiness.

The team conducted a meta-analytic review of 357 studies, totalling 2,352,095 participants, of how strongly money and resources—measured objectively or subjectively—are linked to happiness. The review is the largest to date. Overall, the findings from this review reaffirmed the notion that money and resources matter for happiness and that perceived material resources was a stronger predictor of happiness than actual income.

Rationale for this study

The study was motivated by an apparent disparity in research showing weak links between income and happiness and the idea that many people actively seek out higher education, prestigious jobs and higher status in many modern and wealthy societies. In some societies, income inequality has also increased, along with reduced happiness, which would not be expected if wealth and material resources were inconsequential.

This gap between research and observation suggested the possibility that objective measures, such as income, do not adequately capture the influence of money on happiness. The analysis tested the idea that people’s happiness is more dependent on what people think they have compared to others than how much they have absolutely.

The researchers used the MacArthur Scale of Subjective Status — a 10-rung ladder in which people indicated their perceived social status — to test the association between comparative resources and happiness. They found that that higher social comparative resources was significantly associated with greater happiness, beyond objective levels of income and educational attainment. The effect of social comparison was also stronger in countries with high population density, such as Singapore, given that there is often greater competition for resources in denser populations. The findings suggest that improving from past levels of material resources may not be enough, and that social comparison can lead to unhappiness when one determines their status compares less favourably to others.

According to Assistant Prof Jacinth Tan, “Even if people today are earning higher wages or attaining higher educational levels than their parents or compared to 10 years ago, there is going to be limited impact on their happiness if they are not doing at least as well as, if not better than others at the present. In people’s minds, social mobility is not just the ability to ascend one’s own socioeconomic ladder, but also the sense that one is ascending the ladder in the broader, collective society.”

“This will also be important to keep in mind as countries seek ways to emerge from the economic crisis due to the ongoing Covid-19 pandemic. While it is necessary to lift individuals from the current crisis, in the long run, governments must ensure that people are not just doing better than during the crisis, but continue to be able to rise in the post-pandemic society.”

Finally, even though happiness research in the recent years have focused on other sources of happiness, such as having social relationships, giving to others, or expressing gratitude, the authors believe that the impact of money and resources should not be ignored.

Assistant Professor Jacinth Tan added, “Our findings highlight that besides fulfilling subsistence needs, what money and resources mean to individuals—such as fulfilling our psychological tendency for comparison—is important for happiness as well. From an intervention or policy perspective, this understanding is important. Realistically, we cannot increase everyone’s resources indefinitely, so how can we address such needs? At the societal level, could reducing competition and competitiveness help? At the individual level, could we inculcate the value of giving to others, contentment, or any other values that could reduce our tendency to compare to others? Understanding the additional functions and meaning of money and resources to individuals can inform more targeted interventions or policies aimed at increasing the happiness and well-being of a nation.”

The original paper can be accessed from the journal Psychological Bulletin. A preprint of the paper can be obtained by directly contacting the lead author at jacinthtan [at] smu.edu.sg.