“No More Uncle”: Asian Men’s Beauty in the Marketing Spotlight

“No More Uncle”: Asian Men’s Beauty in the Marketing Spotlight 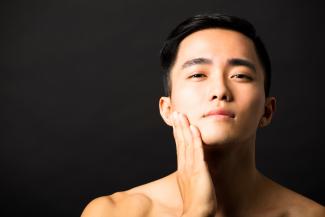 Night cream, pore improvers, anti-aging serums, and cushion compacts are all familiar products in the cosmetics industry. There is nothing new here until you find out who their big users are. No, it is not women but men, and not just young men but men of all ages. While the use of men’s skin and hair products has been on the rise globally, nowhere is this more pronounced than in Asia.

The global men’s beauty/grooming industry, once an afterthought to the women’s beauty market, had been growing at an impressive rate. This market, which included men’s bath and shower items, deodorants, and skin and hair products, was expected to reach US$60 billion by 2020, making it one of the fastest growing industries in consumer marketing.

Within Asia, South Korea was the influencer or “lead” market in men’s beauty, even as China had higher sales and growth. The South Korean market reached about US$1.5 billion in 2016, which was more than 10 times the size of the industry from just a decade ago. The average Korean man used about 13 cosmetic products on a monthly basis.

Trends in men’s grooming in Korea could be used to predict future demand patterns for follower countries. In addition to the many types of cosmetics items bought and used, Korean men also used a greater variety of products and services such as mask packs and facial peels, dermatologists and cosmetic surgery. As for the main purchase channels, the primary ones were drugstores, online open markets, and one brand shops. As to who or what influenced purchases, the major ones were online product information, advice from wives and girlfriends and friends, and online user reviews.

In terms of new market segments, men’s grooming businesses were tapping into market opportunities such as “NOMU,” “JOOBAEK” and “YUMMY.” NOMU was short for “No More Uncle” and represented men who wanted to rid themselves of the derisive “uncle” tag that was a euphemism for old or unfashionable. Whereas before, NOMUs attempted to be trendy just with clothing, by the turn of the century they were turning more and more to grooming. They used skincare products and went to facial spas.

JOOBAEK was a moniker for Weekend (“Joomal”) Department Store (“Baekhwajum”) Warrior and connoted middle-aged men who no longer stayed at home or just accompanied their wives and family for shopping, but instead went shopping alone to reward themselves. Unlike their parents who preached individual sacrifice for spouse or family, both NOMU and JOOBAEK represented Asian males with the new attitudes that it was now okay to be self-indulgent. Unlike the past when they passively wore what their girlfriends or wives bought them, more and more men shopped alone to discover what pleases them and helps them to be more individualistic. JOOBAEK and NOMU may not be mutually exclusive since there can be some overlapping characteristics, such as their age group. Instead of being completely different, JOOBAEK can be considered a sub-segment of NOMU that had higher incomes and a greater need for physical self-expression.

Another new segment, YUMMY – Young Urban Male – is perhaps derived from the old YUPPIE (Young Urban Professional) concept popular in the 1990s. They have very exclusive tastes for restaurants, cars, fashion, watches and grooming. YUMMY are also young, single and often living alone but, unlike the previous generation of men, take good care of their faces and bodies. Spurred on by television shows showcasing sexy male chefs, they relish learning about and cooking haute cuisine for themselves and friends. They drive the demand for expensive grooming products such as anti-aging serums, pore management products and fragrances. As part of their need to be pampered as men, their havens of choice are high-end barbershops.

Written by in Jin K. Han, Professor of Marketing and Research Director for LVMH-SMU Luxury Brand Initiative at SMU, and Dae Ryun Chang at Yonsei School of Business, the case discusses an emerging global market trend and opportunity – the increasing use of beauty products by men, especially those in Asia. The case also includes a rare pedagogical option of a fictional narrative film, “The First Timer”, specifically produced for the case study. This multimedia platform allows instructors to use a written case combined with a visual story to flesh out the dynamics of men and their potential trepidation of becoming initiated to grooming products.