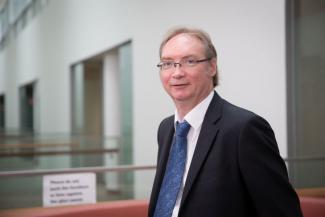 The world of quantum technology – often associated with science fiction such as in the Ant-Man movie in 2015 – was in the spotlight recently after Google computer scientists released a paper in September claiming that a quantum computer had demonstrated “quantum supremacy”, which describes the potential of quantum computers to significantly outperform traditional ones.

While an ordinary or classical computer stores data and performs computations as a series of bits that are either 1 or 0, a quantum version uses qubits, which can be 1 and 0 at the same time. The properties of qubits allow quantum computers to perform billions of calculations simultaneously, far outpacing the fastest classical computers.

“Obviously, for many applications you do need deterministic answers but there are quite a few applications that are probabilistic in nature and a quantum computer should be much more useful,” he said.

A recent study by Assoc Prof Griffin argues that quantum computing could be used to solve what is known as the “blockchain trilemma”, which refers to the notion that improving all three fundamental attributes of blockchain – decentralisation, scalability, and security – at the same time is not achievable. For example, a larger network is harder to secure, or the more decentralisation there is, the less scalable the network.

A blockchain is essentially a way of keeping records securely on a digital platform. The technology that drives cryptocurrencies such as Bitcoin is finding a growing number of applications across different industries; from logistics to financial services.

Overcoming these obstacles will address the issue of the interoperability of different blockchains, and lead to greater and safer transfer of information between existing blockchains. Quantum computing could also potentially offer faster performance in searching blockchain transactions. SMU has just begun a collaboration with OneConnect Financial Technology Co Ltd, an associate company of China’s insurance giant Ping An Group, to explore these issues and solutions. The research collaboration will focus on studying quantum algorithms that could augment blockchain technology in areas of robust large-scale consensus, efficient on-chain data searching, private record validation, high-speed smart contract processing and interoperability between blockchain networks.

However, there remain several major obstacles to using quantum computing to tackle the blockchain trilemma. Firstly, the current performance of quantum devices is insufficient for more than a Proof of Concept.

“Quantum devices still have insufficient qubits for practical applications, the qubits are fragile and noisy and the methods to transfer data into and out of quantum computers is slow,” said Assoc Prof Griffin, referring to the fact that noise can interfere with the quantum state of qubits. The cost of quantum devices also needs to come down significantly so that industry players can afford the hardware, while people will need to learn how to use these advanced computers.