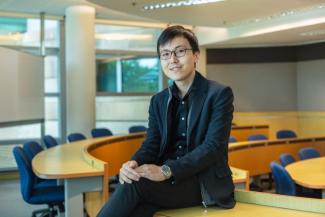 Singapore Management University (SMU) School of Social Sciences (SOSS)’ fourth year PhD student Sean Lee Teck Hao has won not one but two research awards. This is the first time that an SOSS graduate student has been awarded with research awards honours from the Singapore Psychological Society (SPS).

Open to all academic institutions in Singapore across all domains of Psychology, the Singapore Psychological Society (SPS) Student Research Award recognises research excellence among psychology student researchers in Singapore. One winner is selected from each category – Diploma, Degree, and Postgraduate and Sean won in the postgraduate category. The second award he won was the inaugural Fred Long Award for Research Excellence. This national level award is given out to only one psychology research student across all academic institutions in Singapore whose work demonstrates both high levels of research rigor and practical significance. Sean is the only winner whose work was selected from about 30 empirical research papers submitted and he took home a cash prize of S$250.

Awarded Paper: Scrutinising the association between interleukin-6 and the precipitation of depression and anxiety symptoms: A population-based longitudinal study

The paper that landed Sean these awards was an empirical assessment of the relationship between interleukin-6 (IL-6), a blood-circulating protein responsible for inducing inflammation, and the experiencing of depressive and anxiety symptoms.

According to Sean, it all started when he began noticing articles published in renowned journals claiming that inflammation is a biological base of depression and anxiety disorder, simply because IL-6 levels were frequently observed to be positively correlated with the experiencing of depressive and anxiety symptoms. This was widely covered by reputable media outlets, stating that IL-6 may be used as a biological marker of these mental disorders and that anti-inflammatory drugs may be used in treating such disorders. Upon further reading, Sean was alarmed to find out that anti-inflammatory drugs, which carry risks of adverse side effects, were already gradually being used to treat depression and anxiety disorder even when patients present no overt, physical symptoms of inflammation.

Possessing access to a large, longitudinal, nationally representative dataset (N= 1,255) containing these implicated variables, Sean attempted to provide a more rigorous examination of this relationship. Sean’s results showed that IL-6 neither plays a causative nor predictive role in the precipitation of depressive and anxiety symptoms. Instead, IL-6 was only significantly associated with one’s current levels of depressive and anxiety symptoms, and was not predictive of levels measured approximately six years later, even after controlling for baseline levels and other relevant variables (e.g., medication use).

Professor Chandran Kukathas, Dean, School of Social Sciences and Lee Kong Chian Chair Professor of Political Science said, “We are very proud of Sean for his achievements. These national awards are a strong testament to the research quality and rigour of the School and we hope that more will follow in his footsteps.”

Commenting on Sean’s win, his supervisor Angela Leung, Lee Kong Chian Fellow, Associate Professor of Psychology (SOSS) said, “These research awards speak of Sean’s research credential, grit, and passion. His research takes a multidisciplinary approach that bridges different research territories not only within the psychology discipline, but also across diverse scientific disciplines. Such perspective is extremely invaluable in bringing novel and inspiring insights that can push the research frontier. I am confident that Sean, as a research broker who can facilitate multidisciplinary dialogues and collaborations, would contribute greatly to the next-generation Social Science research. I am very glad that our PhD Programme in Psychology has nurtured young scholars like Sean with such strong research calibre and publication record.”

Said Sean, “I feel really honoured to be the first SMU graduate student to receive these prestigious awards from SPS. I am grateful to my PhD advisor, Dr Angela Leung, who has been an extremely supportive mentor. Under her tutelage, I have been able to significantly improve my research, writing, presentation, and even networking skills. She is generous in sharing her knowledge and resources, and that has aided me tremendously in my growth as a researcher.  I would also like to express my gratitude towards Dr Andree Hartanto, who introduced me to and trained me in the use of large, nationally representative public datasets. I hope that these wins at the national level would serve to accentuate the high levels of Psychology research quality and rigor of the SMU School of Social Sciences.

On a personal level, I hope to be able to secure a full-time faculty position upon graduation next year, so that I may continue to advance knowledge in my three primary streams of research (creativity and innovation, emotions and well-being, and psychometrics), and to inspire others to delve into and contribute towards the field of Psychology through teaching and mentoring students as my lecturers and mentors have inspired me to.”

Sean’s paper is currently being prepared for journal submission/publication and will be made accessible on his ResearchGate profile upon successful publication.

Congratulations Sean, on achieving two Awards for your research excellence.