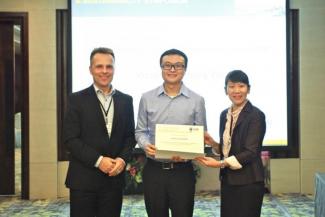 · Presented with the EcoFriend Awards for the Youth & Students Category by the National Environment Agency in September 2014.

Mr Victor Lee Hong Zhi’s journey to promoting and advocating environmental protection and sustainable development started with a piece of Ferrero Rocher chocolate his teacher brought to class when he was in Secondary Three.

Said Victor, “That piece of Ferrero Rocher chocolate was enough for 40 students to each get a taste of, but not enough for all 40 of us to enjoy it. This sharing taught me that Mother Earth provides enough to satisfy every man's need, but not every man's greed. Many entities, be they individuals, organisations or even countries, are “hijacking” the Earth for their selfish profit and growth without thinking about others. This was what prompted me to embark on my green journey.”

Victor has not looked back since.

While still in secondary school, he went to a village in Dali, China’s Yunnan province, to build a biogas tank which converts animal and human waste into biogas to substitute wood for heating and cooking purposes. This helped to slow down the rate of deforestation in the area.

Victor was the President of Singapore Polytechnic Environment Club in 2008 when he organised the Amazing Green Race for lecturers to explore green issues together through games. He also took part in a study trip to Vietnam’s nature reserves to learn how global warming has affected local butterflies and other animals, and their efforts in nature conservation.

At SMU, the School of Information Systems (SIS) student servedtwoterms as President of SMU Verts, which promotes environmental conservation through awareness campaigns and partners with environmentally-passionate students to engage the SMU community. During his tenure, Victor sought to strengthen the partnerships amongst the students groups and staff, within and beyond SMU by initiating common platforms for discussions. In 2013, he initiated two inaugural platforms for joint discussions amongst student groups – the SMU Eco Conversation for SMU student leaders to coordinate the efforts and resources of various environmental interest groups within SMU; and the Joint University Sharing Session for Green Club presidents of local universities to share knowledge, best practices and explore potential collaboration.

[Photo: As a member of NEA’s Youth Environmental Envoy Programme, Victor worked closely with NEA to host a workshop in SMU to discuss environmental issues in June 2013.]

In addition, he planned capacity building programmes to increase the capabilities of his SMU Verts members by working closely with NEA’s Youth Environmental Envoy Programme. He also introduced new initiatives in SMU, such as Earth Hour, when Victor and his team worked with the Office of Facilities Management to switch off unnecessary lightings in the school for an hour in 2012 and 2013; Fashion Swop, held in November 2012 to March 2013 to promote waste minimisation among the SMU Community by swopping their loved used clothes with others so as to save cost and reduce the need to buy new clothes; and the United National Environment Programme (UNEP) Eat Save World Environment Day, held in May to June 2013 to encourage SMU students to suggest ways to reduce food wastage.

[Photo: Victor represented Singapore at the ASEAN Workshop on the Role of Youth in Green Consumption held in Thailand in July 2013. He presented efforts by Singapore’s youths in green consumption, and led the ASEAN youths in the drafting and adoption of a joint statement.]

In recognition of Victor’s decade-long engagement in environmental and sustainability causes, he was presented with the inaugural DHL-SMU Environmental Sustainability Award on 28 November 2014 during the Logistics and Supply Chain Workshop organised by DHL-SMU Green Transformation Lab. The Lab introduced the Award to recognise and encourage students who have demonstrated involvement with projects and activities that have resulted in positive sustainable impacts on the environment and community.

This award came hot on the heels of the 2014 EcoFriend Awards by the National Environment Agency (NEA) where Victor won the award for the Youth & Students Category. The Awards, presented by Minister of Environment and Water Resources Dr Vivian Balakrishnan on 30 September 2014, recognise the efforts and achievements of environmentally-proactive people in Singapore who have made contributions to the environment.

On receiving these two awards, Victor said, “The awards act as checkpoints for me to evaluate my effort and a motivator for me to do more for our environment. Everyone plays a part in making this world a better place to live in. The SMU School of Information Systems has taught me the importance of systematic thinking and stakeholder engagement, which are useful skills when it comes to convincing various stakeholders to contribute to efforts to create a better and more sustainable environment for future generations.”

The two awards add to a long list of Victor’s achievements, namely the Singapore Polytechnic Green Buddy Award in 2007, HSBC/ NYAA Youth Environmental Award in 2008, and the SMU Excellence in Student Life (Gold Award) in 2013.

In between his hectic academic schedules, Victor currently serves as an advisor to the 2015 NEA Youth for Environment Day where he mentors and guides youth leaders from various tertiary institutions in Singapore in organising the event. He is also working with a group of friends from SIS to develop a software solution to promote environmental sustainability.

P.S. If you are wondering what the class representative did with the Ferrero Rocher chocolate, well, he ate it all up.